BALTIMORE -- Baltimore could become the first major city in the United States to require health warning labels on sugar-sweetened beverages. The city's health committee will host a hearing on the proposal June 7. 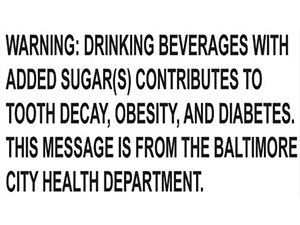 Robi Rawl, executive director of Sugar Free Kids Maryland, says the labels would help consumers make informed choices about buying the beverages, warning people that overconsumption of the drinks may cause obesity, diabetes and other health problems.

The bill was introduced in January and is sponsored by City Councilman Nick Mosby, who was a candidate for mayor at the time.

The bill would also require labels on restaurant menus, advertisements and in stores that sell these products, according to a report by WBAL 1090.

The bill is opposed by retailers and the beverage industry, who argue that it should be up to consumers to decide for themselves if they want to buy these beverages.

“At a time when Baltimore ... is struggling to retain grocery stores and supermarkets, this new mandate, which exists nowhere else in the nation, will have a chilling effect on attracting new merchants to the city,” said Cailey Locklair Tolle, president of the Maryland Retailers Association, to the news-radio station. “What proponents of this legislation cannot grasp is that the environment for retailers in the city is already fragile. It is shortsighted and takes the city in the wrong direction.”

The Restaurant Association of Maryland and the Maryland-Delaware-D.C. Beverage Association also oppose the proposal.

San Francisco lawmakers approved a similar measure last year. There, beginning July 25, all billboards and ads for sodas and other sugar-added drinks will include this label: “WARNING: Drinking beverages with added sugar(s) contributes to obesity, diabetes, and tooth decay. This is a message from the City and County of San Francisco.” However, the new law is being challenged in court by the American Beverage Association.