ATLANTA-- The Coca-Cola Co.'s growth strategy in the U.S. soda market for much of the past decade has included "supersized" offerings. Now, the beverage giant's sales formula revolves around more package sizes on store shelves, said the Wall Street Journal. 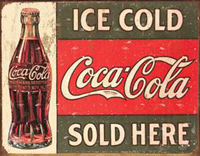 Coca-Cola will announce this week the launch of 12.5-oz., 89-cent bottles to accompany the 16-oz., 99-cent bottles it rolled out nationally last year as an alternative to 20-oz. bottles in U.S. convenience stores. It will also slash the suggested retail price on its recently introduced eight-pack of 7.5-oz. Coke "mini'' cans in supermarkets by about 20% to $2.99 to try and lure more customers, the report said.

The proliferation represents a departure from years of relying heavily on three basic packages--20-oz. bottles in c-stores and two-liter bottles and cases of 12-oz. cans in supermarkets.

Coca-Cola is importing the strategy from Mexico, where bottling partners began diversifying package sizes more than a decade ago to offer more price options in the wake of the 1994 peso devaluation and economic crisis, the Journal added.

"In the U.S.A., we're really just at the beginning," Sandy Douglas, president of Coca-Cola North America, told the newspaper about the increasingly segmented price-package strategy for the company's Coke, Sprite and Fanta soda brands.

Coca-Cola is betting it can boost revenue and profits in the United States even as it scales back volume per transaction amid rising costs for commodities such as plastic and high-fructose corn syrup. Although the smaller packages carry lower sticker prices, the consumer pays more per ounce. At the same time, Coca-Cola is raising prices on larger bottles and cans for consumers with more money in their pockets, said the report.

Outside a c-store at a Shell station in Atlanta last week, red Coca-Cola signs touted 16-oz. cola bottles for 99 cents. Inside the store, 20-oz. and 1-liter bottles were $1.49 and $1.89, respectively. A bundled "combo meal" included a 24-oz. Coke fountain drink and two hot dogs for $2.99, among several other pitches at different price points, the paper said.

"Bring 'em in and then trade them up," Glen Walter, Coke's chief region sales officer, told the paper concerning of the multi-price-point strategy.

The company is also attempting to reel in new and lapsed customers in supermarkets with its 7.5-ounce cans, which were rolled out nationally last year but still represent less than 5% of its sales mix. The mini cans replaced 8-oz. cans to bring the calorie count below 100, hopefully attracting more weight-conscious drinkers.

While the retail price of the eight pack of 7.5-oz. cans will fall to just below $3 in coming weeks, consumers will still pay a per-ounce premium. The smaller cans will cost 37 cents each, the same as 12-oz. cans.