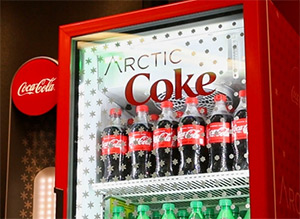 ATLANTA -- The Coca-Cola Co. is testing about 800 of its Arctic Coke machines in convenience stores across the United States, according to the company.

Arctic Coke machines turn an extra-cold bottle of Coca-Cola and other of the beverage maker's brands into a frozen beverage in a matter of seconds, serving up an innovative and surprising experience for consumers.

Arctic Coke vibrates a bottle maintained at a specific temperature, sending a shiver through the liquid, which then forms ice crystals in a fraction of a second. The unit backlights the bottle so the transformation is visible to consumers.

“Consumers find it both fun and innovative,” said Kim Drucker, director of platform innovation for Coca-Cola North America. “They’re drawn in by the fact that they can be part of the transformation process. And what brings them back is the fact that the drink they just helped make stays colder for longer. The promise of having an icy-cold Coke from the first sip to the last sip really resonates.”

The pilot includes Coca-Cola, Diet Coke, Sprite and Powerade Mountain Blast. Cherry Coke, Fanta Orange and Mello Yello will soon be added in select outlets, the company said, and the team is evaluating other brands.

An Arctic Coke cooler/machine holds 70 bottles, which are chilled to less than 30 degrees Fahrenheit, compared to 45 degrees in a traditional cooler.

“What we’re trying to do is heighten the sensorial experience,” Drucker said. “They’re getting the same delicious Coke they know and love; we’re just creating a visual effect that engages the consumer ... in the process of crafting their beverage.”

Coca-Cola debuted Arctic Coke in June 2016 at 20 convenience stores in the Indianapolis area and displayed the technology at the 2016 NACS Show. Sales at the participating locations were up 15% to 20%, giving the company the confidence to extend the pilot.