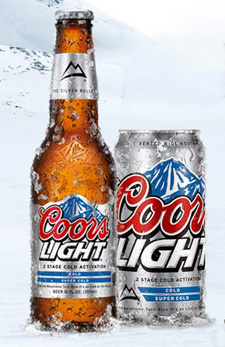 The milestone, anticipated for more than a year, comes in the wake of years of declines by Budweiser, the only full-calorie beer in the top five U.S. beers.

Bud Light is the top-selling U.S. beer by a substantial margin, with 19.1% of the market in 2010, according to industry publication Beer Marketer's Insights. Coors Light sales by volume rose 0.8% during 2011, to 18.2 million barrels, while Budweiser sales declined 4.6%, to 17.7 million barrels, according to the source. The figures include Puerto Rico and exports.

Miller Lite was in fourth place, with a 7.5 share, and Natural Light rounded out the top five with a 4.2 share.

Anheuser-Busch has had the two top-selling beers on the list since 1993, said the report. Updated market share data for the rest of the top five will not be available until later this month, it added.

"This is a huge milestone for the entire MillerCoors family," Rick Gomez, vice president of brand marketing for MillerCoors, told the newspaper. He added that 2011 was the seventh consecutive year of sales growth for Coors Light. Taking the No. 2 spot, Gomez said, can help secure the brand "more shelf space, more tap handles and more support."

Benj Steinman of Beer Marketer's Insights told the paper that although the market-share shift likely secures some bragging rights for MillerCoors, it's unlikely to result in any changes at A-B. Budweiser sales have been in decline since 1988, Steinman said, when the brand had a 25% market share.

An Anheuser-Busch spokesperson said the company's 2011 sales numbers will not be available until its earnings report in early March. "We're committed to and on track with our strategy to stabilize Budweiser," he told the Tribune.

The sluggish economy, high unemployment and increasing consumption of wine and liquor have all taken their toll on the beer industry, which has posted three consecutive years of declines, said the report.

The volume declines have been particularly acute for the nation's largest brewers, according to Beer Marketer's Insights. Anheuser-Busch in 2011 shipped fewer than 100 million barrels for the first time in more than a decade. MillerCoors shipped fewer than 60 million barrels, which is the lowest rate for Miller and Coors since 1989, the report said.

With Coors Light posting slow but steady gains, Miller Lite, which started the light beer craze in the mass market, has reported three years of declining sales. MillerCoors plans to end the brew's "Man Up" tagline in new advertising expected this spring, the report said.