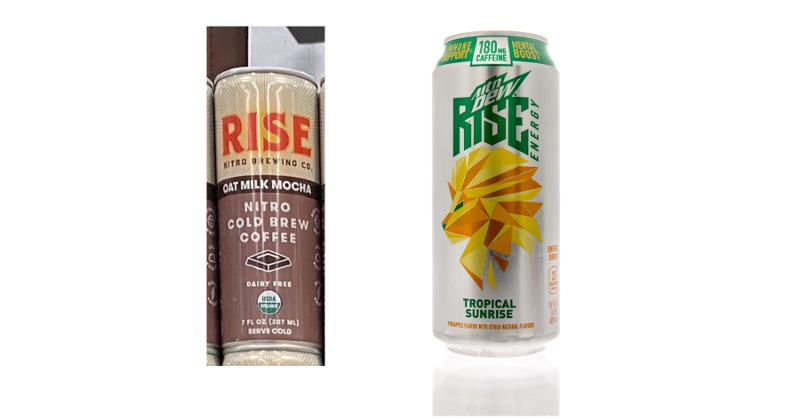 NEW YORK — PepsiCo must stop using the name Mtn Dew Rise Energy for its energy drink, according to a judge’s ruling on a trademark lawsuit brought by ready-to-drink (RTD) coffee maker Rise Brewing.

U.S. District Judge Lorna Schofield in a Nov. 3 ruling issued a preliminary injunction barring PepsiCo from using the Mtn Dew Rise Energy name while the trademark infringement lawsuit is underway. Schofield said Rise Brewing was likely to succeed in its lawsuit, in part, on claims that PepsiCo’s drink will cause customer confusion.

Rise Brewing, New York, makes canned nitro cold brew coffees. The cans feature the word “Rise,” in all caps prominently at the top of the cans in red print. Mtn Dew Rise Energy, which launched in March 2021, also features an all-capped “Rise” at the top of its cans. Both products are sold nationally in grocery and convenience stores.

“[Rise Brewing] is entitled to a preliminary injunction because [it] has demonstrated irreparable harm, a likelihood of success on the merits of the federal copyright claim and that the public interest weighs in favor of granting the injunction,” Schofield wrote in the injunction posted on the U.S. District Court of the Southern District of New York’s website.

Rise Brewing’s CEO Grant Gyesky told CSP that the company will have to see how it plays out with PepsiCo’s execution of dropping Rise from the name.

“We are certainly happy to see that they are moving away from the infringing mark and that justice is being served,” Gyesky said. “Pursuing the lawsuit and potential damages is an ongoing conversation with our legal team but for now I am trying to get back to focusing on building the fastest growing emerging brand in ready to drink coffee.”

PepsiCo did not respond to requests from CSP for comment. The Purchase, N.Y.-based food and beverage company makes brands including bubly, Gatorade, Pepsi, Lipton, Mtn Dew and Propel.