WATERBURY, Vt. -- Shots were fired this week in what will be an interesting showdown between home-soda brewers SodaStream and Keurig Kold. 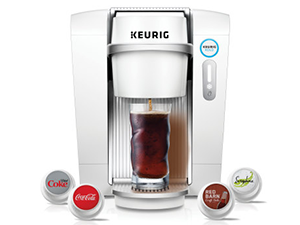 After months of buildup, Keurig initiated sales of its soda maker this morning to customers on its email-marketing list. For $369.99, those customers can "be the first to experience the power of beverage making," according to the email. And the company is marketing the soda brewer as nothing short of revolutionary.

“Keurig has redefined the way consumers enjoy coffee and tea in their homes and offices, and today with the launch of Keurig Kold, we’re embarking on a new journey that will change the way consumers enjoy cold beverages at home,” said Brian Kelley, president and CEO of Keurig. The brewers will be available at retail in six cities in early October, with a national rollout to follow in 2016.

Primary competitor SodaStream International, perhaps trying to steal Keurig's rollout thunder, announced Friday the hiring of a new president for its U.S. operations, beefing up its own team just as the competition launches.

John Sheppard comes to SodaStream with more than 25 years of senior leadership roles and an exceptional track record with some of the world's largest beverage and consumer goods companies, including Coca-Cola, Cott Corp. and Oneida.

He joins the company as president of SodaStream U.S., overseeing all operations for the brand in the United States. He will report directly to Daniel Birnbaum, chief executive officer of SodaStream.

“We ... look forward to seeing [Sheppard] and the team turn around and reignite our business in the United States," said Birnbaum. "John is passionate, enthusiastic and brings fresh energy to the table. With the beverage business in his blood, John has been impressed with the SodaStream brand since it initially broke into the market. He ... will help return the brand to its role as a disruptive player in the beverage industry."

Perhaps SodaStream's biggest advantage today is its price point. Its CO2-based soda-makers can be purchased for as little as $50, a seventh of the list price for Keurig Kold, which adds bubbles to its drinks through something it calls a Karbinator.

But for now, Keurig is grabbing the headlines from USA Today to the Wall Street Journal and the New York Times to Time magazine as it touts the big-name brands its machine can make right on your kitchen counter. Bottom line: As one company offers up another new place—right in the home—where consumers can get their carbonated-soft-drink fix, another is gearing up to push its brand hard. Convenience retailers beware.