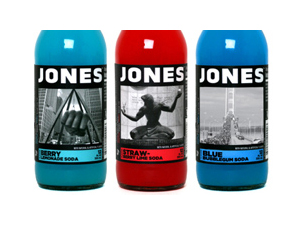 Michigan helped put Jones Soda on the map in the initial years after Jones Soda was founded, and Jones Soda wanted to show its appreciation, said the company. To say thank you for the years of support, Jones Soda has partnered with Intrastate Distributors Inc. to bottle Jones Sodas products in the city of Detroit.

The labels on this edition of Jones Soda features more than 40 photos showcasing the state of Michigan submitted by fans statewide as well as the distinctive logos of the Made In Detroit official clothing brand.

"From the outset of the launch of our brand in 1996 through today, Michigan has been one of our strongest markets. Our Michigan fans and distributors have always been our biggest supporters, and I have never lost sight of that," said Jennifer Cue, Jones Soda CEO. "With the help of the Made In Detroit brand and Intrastate Distributors, this unique bottling and distribution of Michigan-themed Jones Soda is our way to honor and say thank you to the great state of Michigan."

Based in Seattle, Jones Soda markets and distributes premium beverages under the Jones Soda, Jones Zilch, Natural Jones Soda and WhoopAss Energy Drink brands and sells through its distribution network. A leader in the premium soda category, Jones Soda is known for its variety of flavors, ingredients--including pure cane sugar--and innovative labeling technique that incorporates photos sent in from its consumers. Jones Soda is sold through traditional beverage retailers in markets primarily across North America.