ATLANTA -- Coca-Cola Co. announced today that its partnership agreement with Monster Beverage will close later than expected, now targeting the end of the second quarter of the year rather than late Q1 or early Q2. 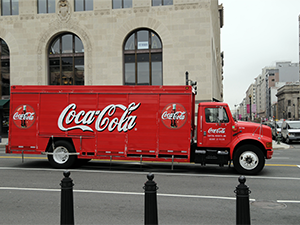 The delay could mean transitions of Monster energy drink distribution from Anheuser-Busch trucks to Coca-Cola bottlers will be postponed in some markets.

The transition is going "slower than expected. We expected it to start earlier," said Coca-Cola CFO Kathy Waller during an earnings conference call this week. " That transition will take place over the year, and so at various times, that is not something that is really under our control. That is really under Monster's control, as they transition that."

Waller is confident the deal will be approved by regulators.

"There is no issue there," she said. "It's just the regulatory process that we have to go through. That is delaying the close. We fully anticipate that it will close."

The delay may be causing uncertainty for convenience-store retailers, according to a recent survey conducted by Wells Fargo Securities.

In its Beverage Buzz 1Q15 U.S. C-Store Retailer Survey report, Wells Fargo analyst Bonnie Herzog said, "Retailers indicate 'a great deal of confusion' on timing of transition to new distribution of Monster products. Some markets [have] already transitioned; some will transition over [the] next several months." Herzog said she has "mixed expectations" about the potential impact of the transition.

Coca-Cola representatives say the company is committed to making a smooth transition. The ownership/strategic partnership deal was announced in August. Coca-Cola Co. will take a 16.7% ownership interest in Monster Beverage Corp. It will take over distribution of Monster products, while Monster Beverages takes on marketing of Coca-Cola's energy-drink brands.

Meanwhile, the Coca-Cola Co. announced that it has taken additional steps toward the implementation of a 21st Century Beverage Partnership Model in the United States.

“We have made significant progress toward the implementation of our 21st Century Beverage Partnership Model in the U.S., which continues to strengthen our franchise system,” said Muhtar Kent, chairman and chief executive officer of Coca-Cola Co. “We will move forward with our refranchising plans in the U.S. as we implement a more agile, modern, customer-focused beverage partnership model.”

Consistent with prior transactions, in the newly granted territories the Coca-Cola Co. and these bottlers will work collaboratively to implement key elements of this evolving U.S. operating model, including:

“Today marks another significant milestone in the evolution of our U.S. operations as we align for growth with partners that have demonstrated success, taken a generational view and consistently invested in capabilities and leadership,” said Sandy Douglas, president, Coca-Cola North America. “These four new expanding bottling partners--Atlantic, Chesterman, Odom and Ozarks--bring deep local knowledge and have demonstrated both outstanding commercial capabilities and consistent, sustainable success within their communities.”

The new transactions are subject to the parties reaching definitive agreements. Financial terms were not disclosed.