NEW YORK -- Sales of Monster Energy drinks are growing fast, according to an Associated Press report, propelling the earnings of owner Hansen Natural Corp. Energy drinks as an industry are growing as well, but Hansen says Monster is outpacing competitors like Red Bull, NOS, AMP and Full Throttle. 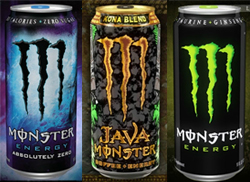 Hansen said it sold $484 million worth of Monster drinks in the second quarter, a 28% increase over the previous year. And though the Los Angeles-area company also sells sodas, teas and smoothies, the Monster drinks accounted for 94% of the increase in gross sales.

Hansen shares climbed nearly 11% since the beginning of August through this past Tuesday. During that time, the S&P 500 has lost 10%. On Wednesday, shares hit a new 52-week high of $86.88. Hansen's performance is also a window into how people deal with the stress of a faltering economy, just as U.S. cigarette sales showed their first uptick in years during the 2008 financial crisis.

To be sure, Hansen is aware that a weak economy could force customers to pull back even on small luxuries like a caffeine jolt. "We are in very uncharted waters now," longtime CEO Rodney Sacks said in a call with analysts Aug. 4. "But we are positive."