YORK, Pa. -- Rutter's Dairy has introduced Rutter's-branded vanilla and strawberry milk pints to the consumer market. For years, the two flavors were available only as part of Rutter's school milk program. The new pintssold in plastic bottlesare the first new flavors of milk introduced by Rutter's in a few years.

Rutter's had distributed another company's brand of vanilla and strawberry milks to stores. But with its decision to develop its own branded products, Rutter's drew upon its track record with schools.

"These two flavors have been very popular with schoolchildren," [image-nocss] said Todd Rutter, president of Rutter's Dairy. "Besides, our goal is to get the Rutter's brand into more market segments rather than be a distributor for other brands."

The new pints are available at all Rutter's Farm Stores in York, Adams, Cumberland, Dauphin, Franklin and Lancaster counties in Pennsylvania and at many other retail outlets.

Rutter's Dairy is part of the family-owned Rutter's companies, all based in York, Pa. The dairy serves Pennsylvania, Maryland, Delaware and New Jersey. 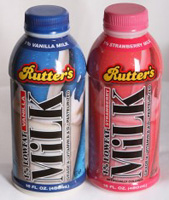