LONDON -- After dancing around a deal for months, SABMiller plc said that it has reached an agreement with Australian brewer Foster's Group Ltd. on a recommended cash offer to Foster's shareholders at $5.10 (Australian; $5.15 U.S.) per share, which values Foster's equity at approximately $9.9 billion ($10 billion U.S.). 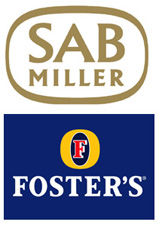 SABMiller's original offer came just a month after Foster's completed the separation of its beer and wine operations, said a Wall Street Journal report. Although many industry watchers expected the demerger to lead to multiple bids for Foster's, no rival bid to SABMiller's emerged, though Foster's said Wednesday that it would still consider one. That, as well as recent choppiness in global financial markets, likely helps explain why Foster's was ultimately unable to manage to extract more of a takeover premium out of SABMiller.

The U.K. brewer's shareholders cheered the news, as its shares reversed a nearly 3% decline and were up slightly in midday London trading. Foster's shares, which registered a small decline in regular trading in Australia, were closed there by the time the announcement was made.

When it was first proposed, some SABMiller shareholders questioned the logic of the tie-up, given the company's push to expand into faster-growing developing markets, and not developed ones with lower growth profiles like Australia. But after missing out on recent deals, including the $7 billion acquisition of Mexico's Femsa Cerveza that Heineken NV sealed last year, SABMiller was determined to secure the purchase of Foster's.

The deal appears mainly to be about running Foster's better and more efficiently by folding it into the global "juggernaut" that is SABMiller, said the report. Analysts have estimated that the combination could produce some $150 million ($151.2 million U.S.) in cost savings a year.

"Foster's will become an important part of our business, and through the application of our commercial capabilities and global scale, we expect to build on the initiatives that Foster's management has put in place, further enhancing Foster's performance and creating value for our shareholders," said SABMiller CEO Graham Mackay. "Foster's has a longstanding and proud reputation as one of the leading companies in Australia. We look forward to working with Foster's employees and other stakeholders to ensure the success of Foster's in the future as the largest brewer in Australia with an outstanding portfolio of brands."

As part of the transaction, and in line with Foster's previously announced capital management initiative, Foster's will pay its shareholders a return of capital of 30 cents per share prior to closing, reflecting both the confirmed value of historic tax losses and a better cash/net debt position than assumed in SABMiller's initial proposal.

The acquisition of Foster's is consistent with SABMiller's strategic priorities and will provide SABMiller with exposure to Australia's strong economic growth prospects, a leading position in the stable and profitable Australian beer industry and the opportunity to apply SABMiller's capabilities and scale to improve Foster's financial and operating performance, the company said.

The directors of Foster's have unanimously recommended that shareholders vote in favor of the deal.