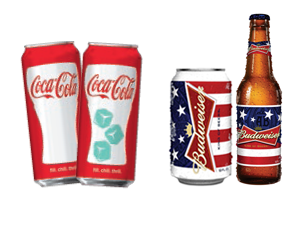 Anheuser-Busch is bringing back a patriotic look for its Budweiser beer, while Coca-Cola has launched a chill-activated can for its flagship cola.

Just in time for the Memorial Day holiday and summer barbecue season, the limited-edition red, white and blue Budweiser cans and bottles have arrived on shelves. This year marks an even larger commitment to helping military families—with Budweiser and its wholesaler family donating more than $3 million dollars to the Folds of Honor Foundation.

Now through Aug. 15, beer drinkers can enter a code contained inside specially marked packages of Budweiser on Budweiser.com/donate to trigger a $1 donation to Folds of Honor, accounting for up to $1 million combined with wholesaler contributions for a more than $3 million total donation to Folds of Honor in 2014. With each educational scholarship valued at $5,000, Budweiser and its wholesaler network’s estimated more than $3 million donation will provide more than 600 scholarships to families of soldiers killed or disabled in action.

Budweiser, with the help of its wholesalers, also plans to honor this year’s recipients with a series of personal scholarship deliveries via the world-famous Budweiser Clydesdales, The Clydesdales will also help Anheuser-Busch honor military veterans at the 115th VFW National Convention, taking place in Budweiser’s hometown of St. Louis on July 22.

Meanwhile, Coca-Cola’s chill-activated can, on display during the NACS Show in October, is a fun and engaging container that lets consumers instantly see their can of Coke is ice cold.

Printed with thermochromatic ink, the Coca-Cola chill-activated can reacts to fluctuating temperatures by changing color. The 16-oz. package is designed to attract traffic, spark excitement and increase transactions in convenience stores. It's also affordably priced at a suggested retail price of 99 cents.

Coca-Cola is encouraging several ways for convenience retailers to leverage the package, including:

Available to c-stores nationwide, the packaging's cold cues drive an instinctive response to the company's flagship brand, providing a compelling invitation to consumers to enjoy the ice-cold Coca-Cola experience, according to the company.