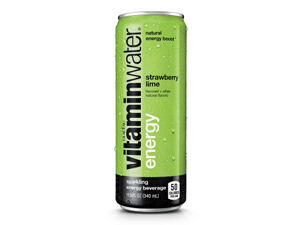 Vitaminwater energy features natural flavors and sweeteners without added preservatives or sodium. it provides an option for those who could benefit from a natural energy kick.

“There is a large contingent of people that likes the functionality of energy drinks but are looking for one that is straightforward and simple, one that’s going to give them a kick from a source they can understand,” said Scott Hargrove, group marketing director, vitaminwater. “Vitaminwater energy has a clear-cut formula that gives people a natural energy boost so they can get the most out of their natural talents.”

Offered in a sleek 11.5-oz. can, vitaminwater energy is available to convenience stores around the country in three flavors: strawberry-lime, berry-punch and orange-mango. A fourth flavor, raspberry-citrus, is available exclusively at 7-Eleven stores. The beverage is sweetened with a blend of cane sugar and stevia leaf extract. It contains 80mg of caffeine (from green coffee-bean extract) and 50 calories per can. The suggested retail price is $2.29.