LONDON & LEUVEN, Belgium -- With an expected, major antitrust hurdle out of the way, the two largest beer companies in the world—Anheuser-Busch InBev and SAB Miller—are moving forward with plans to merge, with AB InBev shelling out an estimated $107 billion in the deal, announced Nov. 11. 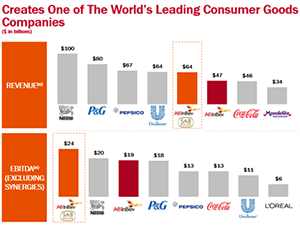 The terms of the formal proposal outlined Wednesday morning are identical to the last reported informal offer made in mid-October, evidence that a major sticking point was how to appease regulators in the United States; if brand ownership had been maintained as it stands today, it would have given the new company 70% of the U.S. beer market.

Rather than jump through regulatory hoops after an agreement was reached, AB InBev was proactive, requesting multiple deadline extensions for the proposal as it worked out the future of SABMiller’s share of U.S. venture MillerCoors with Molson Coors Brewing. Molson Coors has agreed to buy the 58% share of MillerCoors it doesn’t already own, to the tune of $12 billion, giving it rights to all of MillerCoors’ current beer brands in the United States and ownership of the Miller beer brand family globally.

Click here to read an analysis of Molson Coors’ end of the deal.

That leaves most of the rest of the world for “Newco,” the yet-to-be-named new company that AB InBev and SABMiller will become.

“This combination will create the world’s first truly global beer company, and one of the world’s largest consumer products companies,” AB InBev CEO Carlos Brito said in announcing the formal bid. “This provides more opportunities for consumers globally to taste and enjoy some of the best beers in the world.”

In general terms of the deal, agreed to by the boards of both Anheuser-Busch InBev SA/NV and SABMiller plc, each SABMiller shareholder will receive £44 (about $67 U.S.) in cash per share, although “partial share alternatives” are available as well, allowing shareholders who want to be owners in the new company to retain part of their investment.

Upon the announcement that a deal had been reached, he said, “SABMiller has an unmatched footprint in fast-growing developing markets, underpinned by our portfolio of iconic national and global brands. However, AB InBev's offer represents an attractive premium and cash return for our shareholders and secures earlier delivery of our long-term value potential, which is why the board of SABMiller has unanimously recommended AB InBev's offer.”

The deal will require regulatory permissions in several countries, most aggressively in the United States and China. Assuming those conditions can be met, the deal is expected to close in the second half of 2016.

"Our joint portfolio of complementary global and local brands would provide more choices for beer drinkers in new and existing markets around the world," Brito said. "Moreover, a combination of our two companies would allow us to make a greater and more positive impact on the communities in which we live and work, drawing on our shared commitment in this regard. It has long been our dream to build the best beer company, bringing people together for a better world, and we believe this combination represents a step change for our business and our journey towards achieving that goal.”