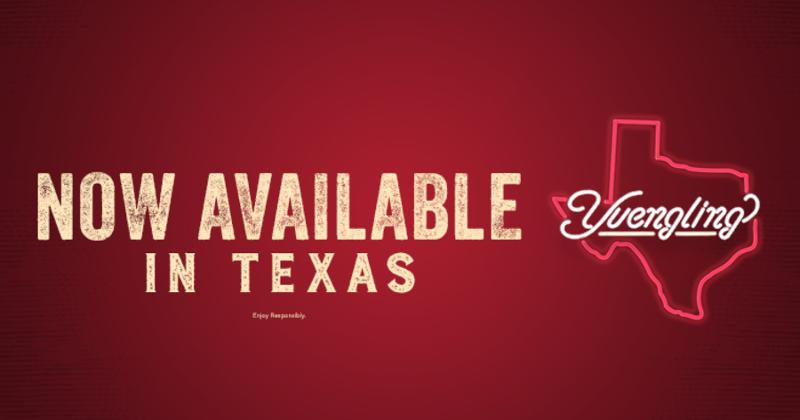 The expansion is the first between Yuengling’s joint venture of D.G. Yuengling & Son Inc. and the Molson Coors Beverage Co., Chicago. The beverage companies partnered in September to expand Yuengling’s reach beyond its current 22-state East Coast footprint.

“It’s an important day for our brewery as we take this large first step in our Westward expansion,” said Wendy Yuengling, chief administrative officer at D.G. Yuengling & Son. “On behalf of our entire Yuengling family, we are humbled by the opportunity to bring the goods to the Lone Star State. The passion these fans have shown for our beer and our brand brings into perspective the nearly 200-years of hard work and perseverance that have brought us to this point in our company’s history.”

In honor of the brand’s launch in Texas, Yuengling will be making special deliveries at iconic destinations across the state including the San Antonio River Walk and Forth Worth Stockyards.

“This is a very exciting time for Molson Coors and Yuengling, as we see this tremendous growth opportunity for our businesses come to fruition with product on shelves,” said Gavin Hattersley, CEO of Molson Coors Beverage. “We’re looking forward to making a lot of beer drinkers throughout the state Texas very happy as they can now get their hands on another one of the nation’s most beloved and iconic beers.”

Yuengling, based in Pottsville, Pa., is the oldest operating brewing company in the United States. Established in rural Pennsylvania in 1829 by German immigrant David Yuengling, the company has grown to become America’s largest craft brewer, according to the Brewers Association definition.

Molson Coors to Bring Yuengling to the West