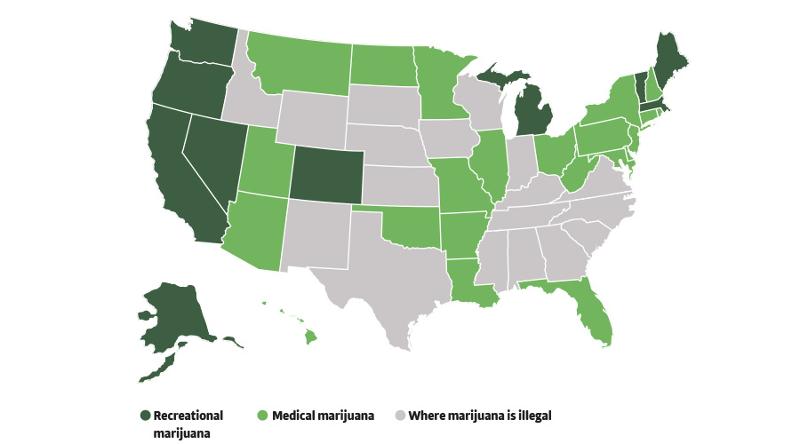 CHICAGO — The passing of the Agriculture Improvement Act of 2018—also known as the Farm Bill—legalized the regulated growth and development of hemp-derived products nationwide, but the transition to legality on a practical level will occur over time, with individual states playing a critical role.

Generally, states are in a gray area with regard to CBDs, with some creating policies and departments and others choosing to sit idle. However, states with legalized marijuana may have a leg up should federal CBD legalization proceed, having already developed guidelines and a regulatory infrastructure around cannabis.

However, CBDs derived from industrial hemp fall under its Food and Drug Branch, which said it follows the FDA on hemp-derived CBDs. “California incorporates federal law regarding food additives, dietary-use products, food labeling and good manufacturing practices for food,” CDPH said in a public document.

Florida: In March, Nikki Fried, commissioner of the Florida Department of Agriculture and Consumer Services, encouraged lawmakers to declare CBDs legal in the state by approving the development of a regulatory infrastructure. Florida at this time allows for the sale of CBDs only through approved dispensaries. “Once that legislation becomes law, CBD products can be tested, regulated and legally sold with the consumer-safety protections Floridians expect,” according to the state’s website.

Kentucky: With Kentucky Sen. Mitch McConnell leading the charge for hemp provisions within the Farm Bill, it’s no surprise that Kentucky was the first state to file its regulatory plan with the U.S. Department of Agriculture (USDA), doing so the day after President Trump signed the measure into law. Kentucky is one of the leading growers of hemp in the United States.

Ohio: The State of Ohio Board of Pharmacy allowed only medical-marijuana dispensaries to sell hemp-based CBDs, but a bill moving through the state Senate would make the products legal and establish an industrial hemp program under the Ohio Department of Agriculture.

Oregon: While Oregon sent a letter of intent to submit a state hemp plan to the USDA, it already has an array of rules for growing, handling and testing for its legalized marijuana industry.

While the 10 recreational-marijuana states across the country may have experience in building the bureaucracy needed for CBDs, hemp will develop on its own track, starting from the Farm Bill directives on down to local enforcement, says Gene Lange, managing partner of Lange, Thomas & Associates, McLean, Va.

“Unless it’s pot, the local police typically don’t get involved,” Lange says. “But the health and safety regulators, there are some amazing statistics regarding tobacco and the number of checks they’ve done on retail stores, so I would image that’s where the regulation and enforcement would come from.”

Is CBD the Next Big Thing?