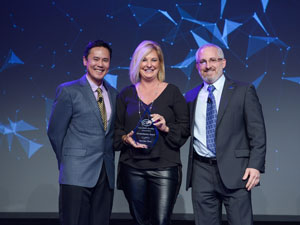 The ceremony began with RaceTrac and a video featuring Robby Posener, vice president of marketing, merchandising, design and construction, talking about the chain’s “6-K” store design. Walking through such a store in Woodstock, Ga., Posener said it’s a model for new-builds with 6,000-square-foot layouts, featuring an extensive coffee program, beer cave and “Swirl World” yogurt bar. Its 13-foot ceilings and roomy design allow customers a moment to “decompress,” while graphics and visual cues both define item groupings and unify the larger store. Many of the unique design elements are functional, Posener said, such as a coffee counter designed to allow room for up to four customers at a time to customize their cups, a pull-open beer cave door that keeps the temperature inside cooler, and electrical switches placed outside the store rather than inside to allow for more storage space. Video

The next award winner was 7-Eleven, chosen for its creation of an internal innovation team. Though members include employees in the chain’s marketing and operations departments, the group functions independently as a way to continually explore and evaluate products and services to bring into stores. One of the results was the chain's new duplicate-key offer, which lets customers replace lost keys using uploaded photos and a 7-Eleven mobile app. In a small number of stores now, the "KeyMe" offer is set to expand, officials said.

“If we’re not keeping pace with [our customers’] needs, we’re not driving sales,” said Jesus Delgado-Jenkins, executive vice president and chief merchandising officer for 7-Eleven, in the ceremony’s summary video. “You can discount and promote, but if you’re not bringing in new products with the taste, quality ingredients, texture and functional needs they want, you can’t propel sales.” Video

Finally, a video showing Flint’s humanitarian efforts featured her not-for-profit, Random Acts Worldwide Inc., and the volunteerism she does with doctors who regularly visit impoverished areas of Africa. She spoke of how medical care in some areas is scarce and how, despite such extreme conditions, the people she has met remain upbeat and happy. At home, her work outreaches to the elderly and incarcerated individuals in need of care and attention. Video

The awards, voted on by CSP magazine’s editorial board, honor those operators who deliver superior results in their respective categories through creativity, innovation, execution and customer service. Held at the InterContinental Dallas Hotel, the ceremony featured short videos summarizing the recipients’ achievements, after which a representative took to the stage to accept an engraved glass award.