DALLAS -- The first day of CSP's Convenience Retailing University took students off campus for store tours and got them thinking about the future of convenience stores and other channels of retail. Here are a few ideas that stood out to CSP's editors. 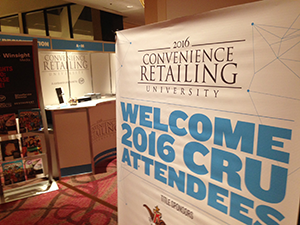 She’s Not a Mermaid?!

Former Starbucks president Howard Behar told the crowd that the Starbucks logo is of a siren, not a mermaid, as many people have thought. The guys who founded Starbucks got the name of the company from the character Starbuck in Moby Dick, and on the prow of the ship was a siren, a twin-tailed mythological creature (which was bare-breasted in early logos) who was said to protect the ship and its crew.

Behar on Starbucks’ premium prices: "As an operations guy, I was always scared to raise prices. But I actually realized, if you execute well enough, people will pay for it. (High prices) really hasn’t been an issue. People will pay if they feel it’s quality and fair."

Be careful how you portray family life in your stores in the future, said University of North Carolina-Chapel Hill professor James Johnson Jr. That’s because, according to U.S. census figures, the population is increasingly referring to itself as being more than one race. (Remember those Cheerios commercials?)

Foodservice "theater" is challenging, but might be worth the investment. Retailers visiting Eatzi's Market & Bakery on the CRU store tours found themselves mesmerized by the prep and baking of fresh bread inside the store. The major challenge, of course: "Can you imagine hiring for those jobs?" asked more than one convenience-store retailer.

While impressed by the foodservice and voluminous coffee, tea and frozen-dispensed offers at a QuikTrip store in Dallas, perhaps most intriguing was the store's four entryways. Asked one visitor: "How do you keep track of who's coming and going?"