SHELTON, Conn. -- It was about four years ago when John West, director of sales and marketing for Alon Brands' Southwest Convenience Stores chain noticed something discomforting while walking through Dallas-Forth Worth Airport. As he passed the airport's USO Center, he noticed a group of uniformed soldiers resting on the floor; the center's doors were locked, the lights off. 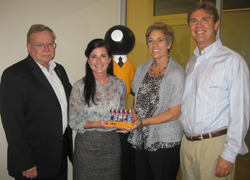 It was then he realized something needed to be done--and that he, his organization and the convenience store industry at large--could help.

Pursuing the matter, West's efforts at first led Southwest Convenience Stores, a 7-Eleven licensee based in Odessa, Texas, to begin raising funds to support the USO through the sale of U.S. flags in its stores. But more recently, West's efforts have led to the national rollout of a new collectors series of pocket lighters by BIC Consumer Products USA featuring military and USO imagery, and a program through which a portion of the sales of the lighters will be donated by BIC, 7-Eleven and additional retail chains to support the USO.

The lighter series, which features six designs featuring patriotic imagery representing each of the four branches of the U.S. military, were shipped to 7-Eleven stores September 1 and will be made available nationally November 16 at a suggested retail price of $1.79 per lighter. In addition to the design, manufacturing and distribution of the lighters, BIC has committed to donate nine cents per lighter sold to the USO, with a minimum commitment of $100,000, according to Traci Gentry, BIC Consumer Products' vice president of marketing. "We are proud of the work that the USO does to support the men and women who are serving in the military as well as their families. These lighters will appeal to consumers who want the opportunity to show their patriotism and support for our troops."

For West, the matter runs far deeper than his sense of patriotism. Those uniformed men at DFW struck a chord with him as, at the time his son, Matt, was enlisted in the U.S. Army, serving his first tour of duty in Iraq. In the months following, West continued to press for additional support of the USO. "When I would see my industry friends, I would always talk up the USO," West said in an interview with CSP Daily News at BIC Consumer Products' headquarters this week. Through the efforts of West and others in the industry, additional promotions to support the USO, such as a recent Coca-Cola program through which $15,000 was raised for the USO through donations from sales of Powerade, have been successful.

In the meantime, Matt West would complete his tour of duty in Iraq, later serve an additional tour of duty in Afghanistan and, while serving a second tour there in August, 2010 at age 36, he was killed in a roadside bombing, leaving behind a wife and three young children. (See Related Content below for the story of Matt West's heroic sacrifice.)

"Jason called it 'a hell of an idea'," West recalled.

BIC contacted the USO and the plan began to take shape, though according to USO corporate alliances coordinator Katie Boyle, not without some convincing. "Admittedly, it took a bit to sink in," Boyle told CSP Daily News, "but when we finally saw the product and the high level of quality, we became very excited. When we received the samples in our offices, I was like the 'Lighter Fairy,' running around handing them out."

While BIC Consumer Products has supported causes such as cancer awareness through Susan G. Komen for the Cure and other causes through other special products, this was its first such effort in pocket lighters. "The partnership between 7-Eleven, the USO and BIC was a great introduction of the USO to BIC and the convenience store industry," said Pat Cordle, BIC vice president of field sales.

The lighters are scheduled to remain available through December 31, 2012. According to Gentry, consumer interest quickly spread through the product placement in 7-Eleven stores and on its BIC Flickers Facebook page, www.facebook.com/bicflickers.

"It feels great to see how this all has come together," West told CSP Daily News. "It's extremely gratifying when we can find the right cause to support in our business. I'm hoping we can get the entire industry to support this program and show our support of our military and the important work that they do."