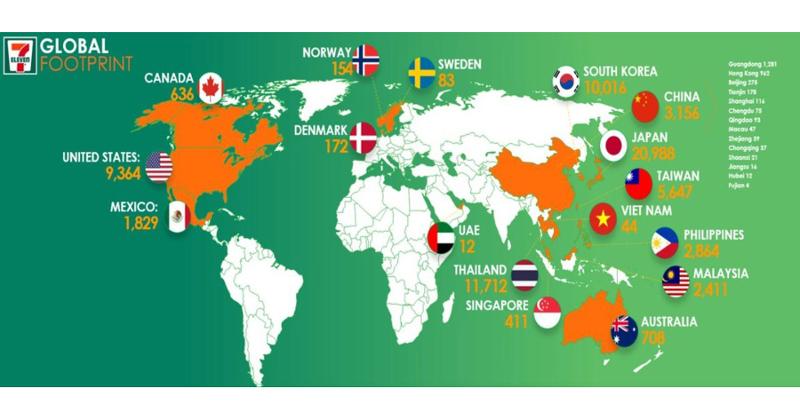 The brand operates in 17 countries and regions around the world, and 7-Eleven will open its first store in India this year, expanding the company's operations to 18 countries.

“Over 93 years, we've grown from a small local ice house in Oak Cliff, Texas, to a global and iconic brand that is 70,000 stores strong,” said 7-Eleven President and CEO Joe DePinto. “That strength is due to a relentless focus on meeting the needs of our customers. We'll continue to place our customers at the forefront of all we do.”

7-Eleven—and convenience retailing—were born in 1927 when an employee of The Southland Ice Co. began selling bread, milk and eggs from an ice dock after local grocery stores were closed. Unlike grocery stores, ice docks were open 16 hours a day, from 7 a.m. to 11 p.m., seven days a week. With the invention of refrigeration eliminating the need for ice stores, Southland transformed its locations into convenient neighborhood markets.

Known for its iconic brands such as Slurpee, Big Bite and Big Gulp, Irving, Texas-based 7-Eleven has expanded into sandwiches, salads, side dishes, cut fruit and protein boxes, as well as pizza, chicken wings and mini beef tacos. 7‑Eleven offers private-brand food, snacks and merchandise products under the 7-Select brand. Customers can earn and redeem points on various items in stores nationwide through the 7Rewards loyalty program, place an order in the 7Now delivery app in participating markets or use 7-Eleven for bill payments, self-service lockers and other services.

In an Age of Disruption, 7-Eleven Fights to Remain Above the Fray