DALLAS -- 7-Eleven Inc. is celebrating Veterans Day by thanking active, veteran and retired military personnel with a free small Slurpee drink. On November 11, 2011 (11/11/11), from 11:00 am to 7:00 pm, all active, veteran and retired members of the military and their immediate families, with proof of current or former U.S. military service, receive a free small Slurpee drink at participating 7-Eleven stores. 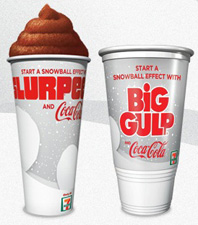 Presenting proof of current or former U.S. military service during that time is all that's required to receive a free Slurpee drink on Veteran's Day.

The retailer added that all month long, customers can support the troops by donating a dollar at any 7-Eleven store to help support Operation Thank You benefiting the USO. With each dollar, the customer will receive a donation card to be displayed in store.

In addition, for troops and their families stationed at 11 U.S. military bases, 7-Eleven has planned a special treat. Slurpee trailers will the company's frozen carbonated drink to them during visits between November 8 and November 12 to the following locations:

In other 7-Eleven news, together with the World Wildlife Fund (WWF) and the Coca-Cola Co., 7-Eleven has developed the Snowball Effect app to help support the Arctic Home project and ensure the polar bear has a place to call home in the future.

As previously reported (see Related Content below), Coca-Cola and WWF are joining forces in a new campaign to help protect the polar bear's Arctic home. For the first time ever, Coca-Cola is turning its red cans white in celebration of the polar bear and committing up to $3 million to WWF's polar bear conservation efforts.

Users can start a Snowball Effect that raises awareness for Arctic Home by downloading the app to challenge friends and for a chance to win tablet or a trip to the Arctic. Users begin building a snowball by checking in at 7-Eleven stores and entering codes on Slurpee cups, Big Gulp cups and specially marked peel-away stickers on Coca-Cola packaging. The user challenges Facebook friends to a snowball fight and scores points to grow his or her snowball. The more a user plays, the bigger the snowball grows to spread awareness.