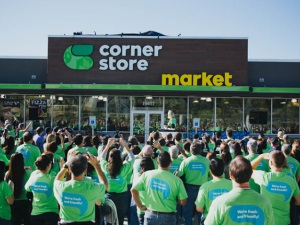 “U.S. merchandise and services gross profits grew by 25% over the first quarter of 2015 on increased sales and margins. Our Canadian stores grew merchandise and services gross profits by 10%, excluding the impact of foreign currency exchange, with an impressive 6% increase in same-store sales,” she said. “We showed continued strength in fuel gross profits in the U.S. as a result of a favorable fuel margin environment and our continued fuel pricing optimization initiatives.”

She said that the company executed on its organic and acquisition growth plans with the addition of 173 stores to its retail network, including the 165 convenience stores of Flash Foods in a deal completed on Feb. 1.

CST opened six new-to-industry (NTI) stores in the United States and two in Canada during the first quarter. The company expects to open 55 to 60 NTIs in 2016.

On May 5, 2016, CST announced it had signed a definitive agreement to sell store operations in the California and Wyoming markets to Dallas-based 7-Eleven Inc. and its subsidiary, SEI Fuel Services Inc., for $408 million. The transaction is subject to customary closing conditions including possible purchase price adjustments at the time of close. The companies said they expect the deal to close mid-summer 2016. The company anticipates using the majority of the cash proceeds from the sale to pay down borrowings under CST's $500 million revolving credit facility.

Also during the quarter, the company launched a review of strategic alternatives to further enhance stockholder value and formed a committee of independent directors to oversee the process. The company appointed two new directors--Tad Dickson and Rocky Dewbre.

For the three-month period ended March 31, 2016, the company reported net income of $19 million, driven by an increase in the U.S. motor fuel and merchandise and services gross profit during the quarter. Net income was $14 million for the comparable period in 2015.

U.S. merchandise and services gross profit increased 25% when compared to the first-quarter 2015, primarily driven by an overall increase in merchandise sales and gross margins in the company's U.S. core and NTI store sales, aided by acquisition and organic growth and new-to-industry (NTI) stores opened in the quarter. In addition to the improvement in non-fuel operations, motor fuel gross profit (per gallon) in the United States for first-quarter 2016 grew to $75 million versus $63 million in the same quarter of 2015, which resulted from CST’s fuel pricing optimization initiative and favorable crude oil and wholesale motor fuel price trends.

CST Brands is one of the largest independent retailers of motor fuels and convenience merchandise in North America. Based in San Antonio, it has more than 2,000 locations throughout the Southwestern United States, Georgia, Florida, New York and Eastern Canada. CST also owns the general partner of CrossAmerica Partners LP, a master limited partnership (MLP) and wholesale distributor of fuels based in Allentown, Pa.