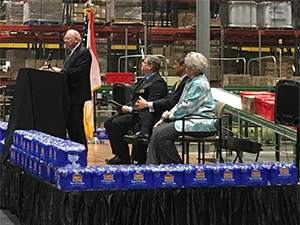 The approximately 275,000-square-foot facility in Terre Haute, Ind., has been operating since February.

“I knew that Terre Haute was a wonderful community, and indeed its proven out to be. We have been welcomed, so welcomed by the community,” Casey’s CEO and chairman Bob Myers told the TV station.

The second distribution center paves the way for the Ankeny, Iowa-based convenience-store chain to expand.

“[It] will allow us to extend the geography of our search for new sites, not only from an organic perspective but also from an acquisition perspective,” CFO Bill Walljasper said during the company’s second-quarter earnings call in December.

The “mileage reach” for a Casey’s distribution center is about a 500-mile radius, Walljasper said. That could bring in new states such as Michigan and Ohio, as well as the opportunity to expand further east in Tennessee and Kentucky and further south into Arkansas.

During its first year of operation, Casey’s plans to transition 30% to 40% of its truck routes to the Terre Haute center and eliminate all three-day routes and a majority of two-day routes.

The center will have 150 employees when it is at full capacity; right now, it has 120, WTHI reports.

Casey’s first distribution center, in Ankeny, reached capacity quicker than the company anticipated due to the boom in prepared foods, Walljasper said during an earnings call in March, teasing a possibility of a third facility.

“A lot will depend on that growth,” he said. “Maybe a better way to look at it: When we’re having this call in about four or five years, we'll probably be talking about a third distribution center."

Casey's operates more than 1,900 convenience stores in 14 states throughout the Midwest.