FERGUSON, Mo. -- A Conoco-branded gas station, a police car and cars in the parking lot of a car dealership were among the damage reported in Ferguson, Mo., Monday night, following the announcement that no charges would be filed against a white police officer who shot and killed an unarmed black teenager in August. 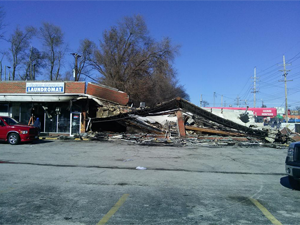 All eyes were on the small community after rioting erupted after the August shooting, which re-kindled concerns of police brutality, particularly against minorities.

A QuikTrip convenience store was among businesses looted and destroyed in the initial outbreak of rioting following the shooting of 18-year-old Michael Brown. With that store still boarded up, QuikTrip officials—along with those from many other area businesses—chose to close their local stores early in anticipation of renewed rioting.

"This is nothing but a precautionary measure for safety," QuikTrip spokesperson Mike Thornbrugh told local newspapers. "This is for the safety of our employees and our customers."

Thornbrugh said he couldn't say when the stores would reopen. "We really don't know," he said. "Like everyone else, we'll be monitoring the situation."

Tuesday morning, Thornbrugh reported no damage to QT stores, but would not comment further.

Along with the Conoco gas station set ablaze, a McDonald’s restaurant and several other local businesses were broken into, damaged or burned Monday night even as local police and National Guard members patrolled Ferguson streets. At least a handful of building were destroyed by fire in the overnight chaos, according to reports

'What Happened in Ferguson Could Happen Anywhere'