OAKLAND, Calif. -- Designing a new convenience store is a challenge. Building an entire new store brand can be a monumental endeavor. When A.U. Energy decided to do both, it started from scratch, asking itself: What do we want to be? Who is our customer? 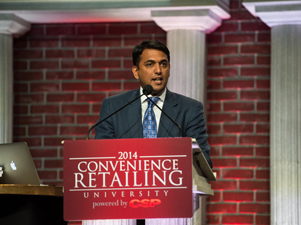 “In 2010, we did a large acquisition of gas stations in the Bay Area,” says Varish Goyal, president, AU Energy, Oakland, Calif. “We went through a strategy meeting shortly thereafter to determine what we were going to with this new network we have. And we determined that we wanted to build a store brand, something to differentiate our c-stores from the rest of the convenience stores on the market.”

The result is Loop, Conveniently a Market, a neighborhood-store concept in and around Silicon Valley that aims squarely for millennial and female consumers.

“Loop is our high-end convenience market,” Goyal says. “We are trying to cater to the healthier side of what people want, healthy and fresh. It’s got a lot of the same things that you see in a convenience store—We still sell cigarettes and chips and soda and candy—but we also have a lot of things that you wouldn’t traditionally see—a salad bar, an espresso bar, frozen yogurt, kale chips, edemame.”

Using high-end grocery stores as a template, Loop stores—there are six so far—are bright and bold, filled with gourmet and upscale products to the right and more typical c-store fare to the left. Shelving has a low profile; coolers are open and easy to access. They’re filled with beverages like coconut water, kombucha and aloe to complement the energy drinks and carbonated soft drinks. Tobacco products are tucked out of sight. Fresh-food merchandising, including the salad bar, bakery and sandwiches, read more Panera than QSR.

COO Pervez Pir said he didn’t have to look far to find inspiration while developing the concept.

“My wife is one of the customers who wouldn’t come to a typical convenience store format,” he says. “Our job was not going to be done until we could get that female audience to come into the store. I use my wife as an example because she is one of my biggest critics, and I’m always looking at her to say ‘Has Loop done that job for you? Will you go into the c-store? Is it safe? Is it clean? Is there good customer service?”

And it’s been successful to some extent, but Goyal says there’s more work to be done.

“The challenge is how do we get them to come inside and see that it’s something different because everyone has their own predefined notion,” he says. “We’ve done a lot of things to get people to walk inside the store: sampling, we pumped people’s gas to allow them to come inside the store. [Getting people to] walk into the gas station, get comfortable and make your own salad. That’s not the easiest thing to [get them] to do.”

In the meantime, six more Loop stores are on the drawing board for this resourceful company.