WHITEHOUSE STATION, N.J. -- Because of QuickChek's steady growth and success in becoming a market leader in the New York metropolitan area, CEO Dean Durling has been inducted into the NJBIZ Hall of Fame. He was one of three New Jersey business leaders inducted at the magazine's annual Business of the Year event on Dec. 9. 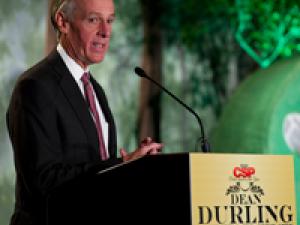 The honor caps off an award-winning year for the Whitehouse Station, N.J.-based convenience store chain, which was named one of the Best Places to Work in New Jersey for the fourth consecutive year and in New York State earlier this year.

"Our mission is to be a great place to work, a great place to shop and a great place to Invest," said Durling. "Being inducted into the NJBIZ Hall of Fame is a great honor for the entire QuickChek family. I accept this on behalf of all of our team members. I really don't look at this as an individual achievement as it is the culmination of the hard work and dedication of more than 3,000 people who have grown a single store serving one neighborhood to serving more than 130 communities throughout two states."

Privately held, QuickChek operates 137 stores throughout New Jersey and Southern New York, employing more than 3,500 team members. The company's Garden State roots trace back to Durling Farms in 1888, which grew to become synonymous with quality milk and dairy products delivered fresh to the customer's door for more than 75 years. In 1967, Carlton C. Durling founded QuickChek to ensure that loyal Durling Farms customers had a neighborhood shopping destination not only for their milk but for a full range of deli and other food products.

Today's stores continue to meet the needs of today's customers. Modern by industry standards, the company maintains bright, clean stores with well-lighted fuel stations and parking lots with wide, easy-to-use entrances and exits that add to a shopper's convenience.

It has helped the industry to define the term "fresh convenience" and remains the market leader in foodservice, fresh coffee, fast fuel and friendly people.

Bucking economic trends, QuickChek continues to grow, opening 25 new stores and hiring an additional 1,100 people since 2007. The company opened its newest store in Wayne in October, creating 56 new jobs with anticipated tax revenue of more than $1 million that will boost the local economy.

CSP Business Media named Durling its 2010 Retailer Leader of the Year, and other industry publications have honored the chain.

QuickChek enjoys a long history of giving back to the neighborhoods and communities it serves, from donating money to numerous local organizations to raising more than $1.5 million for the Juvenile Diabetes Relief Foundation through a variety of annual fundraisers to ongoing relief efforts in connection with Hurricane Sandy.

Its largest team-building and community-oriented event is the annual QuickChek New Jersey Festival of Ballooning, the largest summertime hot air balloon and music festival in North America. The festival has an economic impact of $42.7 million on New Jersey's Travel & Tourism and has raised more than $2.1 million for local nonprofit organizations in the region.