ST. LOUIS -- A new QuikTrip convenience store in St. Louis became the focal point of protests over the shooting by police of Michael Brown in Ferguson, Mo., on August 9, as well as other incidents. A group of 150 to 200 people marched to the in South City c-store early Sunday, October 12, at about 1:30 a.m., and staged a sit-in, reported The St. Louis Post-Dispatch. 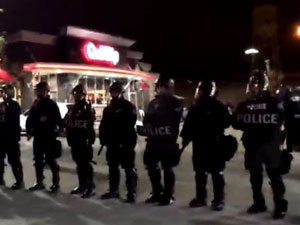 The sit-in was part of a weekend of "Ferguson October" demonstrations. Neither Tulsa, Okla.-based QuikTrip, nor its stores were involved in the shooting incident; however, rioters looted and burned a QuikTrip store in Ferguson, Mo., on August 10 following the shooting, which is still under investigation.

At the St. Louis store on Sunday, police in riot gear met the group, and warned protesters they faced arrest if they didn't disperse.

"This is an unlawful assembly," they announced.

Protesters refused to budge. "They say 'move back,' we say 'fight back'," they chanted.

Police formed a line, and advanced on protesters, said the report.

"Officers had rocks and bottles thrown at them and officers were spit at. None of those officers reported injuries. There were no reports of damage to property," a statement from County Police Sergeant Brian Schellman cited by the newspaper said.

Some of the protesters were hit with pepper spray because they refused to comply with orders to disperse, St. Louis Police Chief Sam Dotson told the paper.

Police spokesperson Schron Jackson said there were no reports of injuries or property damage.

Dotson said it was clear to him that protesters who gathered at the QuikTrip convenience store wanted to disrupt the business and that the 17 people taken into custody had refused orders to leave, said the report. He said that while protesters have a legal right to express their views, they don't have a right to interfere with the operation of businesses. He also said the workers at the QuikTrip were scared.

"We're going to march in! [There will be] no stealing or vandalizing of this property," one masked demonstration leader said on a bullhorn, according to live-streamed footage of the march cited by The Los Angeles Times. "We going to take it over!"

"Something changes when they get to the QuikTrip," Dotson told the Times. "One of the clerks told me people with masks were pulling on the door trying to get in. You can imagine, if you're a QuikTrip employee [who knows what happened in Ferguson], you're probably pretty scared." 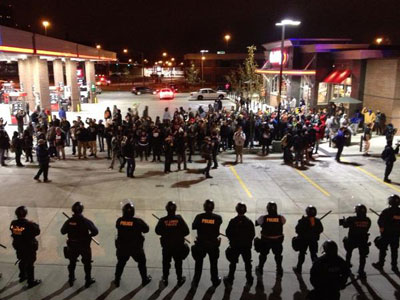 Targeting the QuikTrip worked, one of the protesters told the crowd through a bullhorn, said the Post-Dispatch. It brought scores of police in riot gear to them.

"We had no intention of causing any harm to anyone tonight, but we understood the symbolism" of targeting a QuikTrip, she told the paper.

'What Happened in Ferguson Could Happen Anywhere'