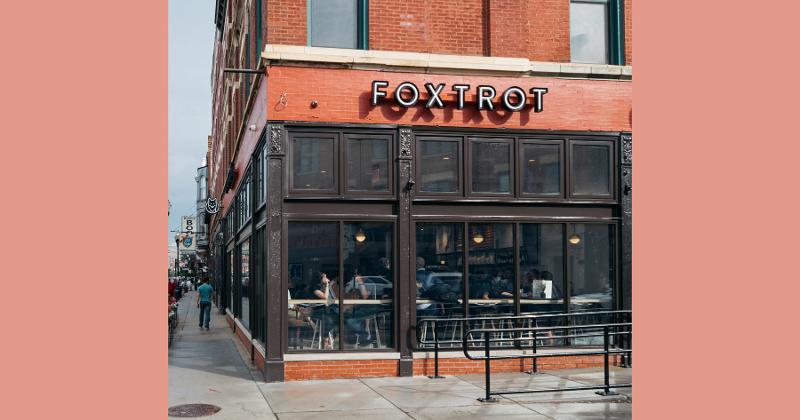 CHICAGO — Urban convenience-store chain Foxtrot is launching a “mass expansion” that includes an additional 50 new stores nationwide within the next two years. The brand is currently in Chicago, Washington, D.C., and Dallas, and it will be adding New York; Austin, Texas; Boston; Miami; Los Angeles; Houston and others to the roster.

Foxtrot flagship stores are underway in neighborhoods such as Chicago's Gold Coast, Washington, D.C.’s Dupont Circle and Old Town Alexandria in Virginia, all slated to open later this year. Additionally, Foxtrot is expanding to other new markets in early 2022 with eyes on Austin, Miami and Boston.

New store formats will be twice as large as Foxtrot’s earliest models, the company said, and they will feature “expansive on-premise dining, enhanced cafe menus and in-store merchandising that leans into and anticipates trends within the CPG landscape.”

Foxtrot has tapped the former Momofuku executive chef Tae Strain to lead culinary development. Foxtrot’s new stores will amplify the “a.m. and p.m.” neighborhood experience, from locally roasted espresso in the morning and discovery-based shopping throughout the day to a wine shop and bar in the evening.

Foxtrot’s proprietary digital app powers its omnichannel relationship with its customers, who shop the retailer an average of six times each month, spending evenly between in-store and delivery, said the company. With the expansion, Foxtrot will continue to offer 30-minute delivery and new five-minute pickup service, as well as nationwide delivery.

The brand has an affinity for curating a space for customers to shop local and small, conveniently, as well as for “anticipatory retail, stocking culinary-forward, data-sourced items.” It offers plant-based snacks, stress-fighting “adaptogenic” chocolates and probiotic energy drinks.

"We first introduced ourselves to customers through online only, rapid-delivery of our dream convenience store,” said Mike LaVitola, co-founder and CEO of Chicago-based Foxtrot. “In the years since, we've realized the pivotal role the physical shops play within neighborhoods. There's no better way to spark discovery than by browsing shelves, and no better platform to elevate local makers than giving them a home in the neighborhood. As consumer preferences shifted online this past year and delivery soared, we were fortunate to see our stores continue to thrive, and act as true hubs of the community when people were seeking connection. In an increasingly digital world, and especially as we exit the pandemic, we believe retail will continue to thrive if done right—beautiful spaces, tailored to the neighborhood, highlighting local makers and artisans, and providing a friendly, warm gathering space for all.”

Foxtrot also merchandises using data-driven “anticipatory” retail. By understanding trends in the consumer packaged goods (CPG) space, Foxtrot can be nimble with respect to in-store merchandising, anticipating what consumers will be coming through the door for and to make it easier for them to discover and purchase, come back often but not have the same experience each time. This approach has driven Foxtrot to launch its own private-label products in wine, ice cream and snacks.