RICHMOND, Va. -- It was with great excitement that GPM Investments LLC announced Friday its purchase the 263-store Southeast Division of VPS Convenience Store Group, nearly doubling the size of the chain, which does business as Fas Mart and Shore Stop. 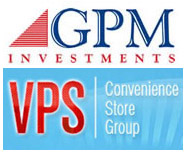 GPM has been "aggressively" hunting down acquisition targets since CEO Arie Kotler took the reins of the Richmond, Va.-based company in August 2011. "This Southeast acquisition is our largest purchase to date and our most exciting," he said.

Bill Reilly, senior vice president of marketing for GPM, told The Richmond Times-Dispatch that the acquisition gives the company increased economy of scale. "The goal is to continue to grow through acquisition of additional convenience store companies," he said. "Someday, we may go public, but we will stay right here in Richmond."

"Contiguous growth is always easiest, but we evaluate every single deal that comes in here on the phone," chief operating officer Chris Giacobone told CSP Daily News. Giacobone joined the company just over a year ago specifically to spearhead an aggressive acquisition strategy. He said the company wasn't specifically looking to nearly double its store count, but more simply, "Growth is our goal."

With the VPS deal, GPM will take on four store brands--Scotchman, Young's, Li'l Cricket, Everyday Shop and Cigarette City--leaving VPS to maintain the Village Pantry and Next Door Store brands in the Midwest in Illinois, Indiana, Michigan and Ohio.

"They have a bunch of strong brands. So it's not our initial goal to go out there and rebrand everything," Giacobone said. "In the long term, we'll respond to what the customer wants."

As reported in a Raymond James/CSP Daily News Flash on Friday, along with the 263 company-operated convenience stores, the deal includes 33 dealer locations and a vertically integrated fuel transportation business.

VPS built the Southeast division that GPM is acquiring through a series of acquisitions. Since then, VPS has significantly improved operations by implementing better merchandizing and inventory programs, expanding foodservice operations and investing in substantial store upgrades and remodels. Today, the Southeast division offers branded quick-service restaurants (QSRs) at 26 locations and deli and bakery offerings at 46 locations, in addition to dispensed and packaged beverages, groceries, tobacco, alcohol and personal care products.

"We will continue to operate these stores with the high level of excellence that VPS has implemented throughout its brands," said Kotler.

Upon completion of the transaction, GPM will operate 467 company stores as well as supply 143 dealer locations for a total of 610 stores, making GPM one of the largest privately owned companies in the convenience channel of business. GPM will operate stores in Virginia, Connecticut, Delaware, Maryland, Pennsylvania, North Carolina, South Carolina, Rhode Island, New Jersey and Tennessee.

"We're pleased that we have found a good home for our Southeastern division with GPM, a respected operator with the experience and resources to build on our success," said Jeff Turpin, CEO of VPS, Wilmington, N.C. "The transaction will allow VPS to focus its attention exclusively on the Midwest division."

Worsley Operating Cos.--and by extension, VPS, an affiliated portfolio company of Boca Raton, Fla.-based Sun Capital Partners Inc., which acquired Worsley in early 2008--was primarily an East Coast company, so its decision to focus on the Midwest is surprising.

"The Mid West group, which includes 174 stores, will continue to be a significant operation that we plan to grow through additional store acquisitions and expanded product offerings," Turpin told CSP Daily News. "We have several additional food offerings in works for the MW group including new QSRs.

He said there are no plans to rebrand all of the approximately 150 Village Pantry or approximately 30 Next Door Stores to a single banner.

VPS let go of such a sizeable chunk of its stores, Turpin said, because "the integration of the VPS Southeast team into Fas Mart group was a perfect fit for the Southeast employees. The combined group of 467 stores under the Fas mart leadership will be able to bring significant value to all of its customers and additional growth opportunities for all Southeast employees.

The companies did not disclose the terms of the private transaction.