KNOXVILLE, Tenn. -- It has been about six months since the FBI raided Pilot Flying J headquarters in Knoxville, Tenn., to investigate an alleged scheme to cheat trucking companies out of rebates for diesel fuel purchased at the chain's more than 650 truckstops. Since the April 15 raid, when FBI and IRS agents seized documents, emails and computer files related to the case, seven Pilot Flying J employees have pleaded guilty in federal court to fraud-related crimes and trucking companies have filed more than two-dozen lawsuits. 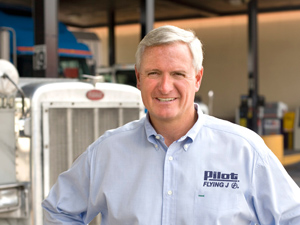 Earlier this month, Pilot Flying J CEO Jimmy Haslam addressed the scandal for the first time since May as he met and greeted truckers filling up at one of the company's travel centers as part of its Driver Appreciation Month.

Now he has issued a message more officially detailing the company's efforts to resolve the matter and to prevent such abuses from happening again:

I want to bring you up to date on all that we've been doing here at Pilot Flying J over the past several months to deal with the unexpected turn of events that began unfolding this past April.

First, let me say Pilot Flying J will emerge from this challenge, as difficult as it has been, an even better company, a company made up of people committed to providing the best service in our industry to America's professional drivers and the motoring public.

I am incredibly proud of our 24,000 plus team members who absorbed the shock of the news of our current circumstances, immediately picked themselves up, and went right back to work doing their jobs. Despite the accusations swirling around in the weeks after April 15, our team members came to work every day with their heads held high, and, through their actions, showed that Pilot Flying J is a company that they believe in.

Since April 15, we have done our best to investigate the allegations made against some members of our diesel fuel sales team, to identify any wrongdoing and to assure our customers that we will not tolerate that kind of behavior anywhere in our company and we will make right 100% any errors we discover.

We have made great progress on all fronts. Let me go through them one by one in the same order in which I announced them on April 22.

1. On April 22, I announced we were bringing our field audit team to Knoxville to review all of our manual accounts with our diesel fuel trucking company customers.

Our field audit team completed the review of all of our manual rebate accounts on June 30, notified almost every customer in whose account we found a discrepancy, and sent those customers checks for the amount of the discrepancy plus interest.

We are now finalizing our audit of all of our other diesel fuel accounts with any type of direct discount agreement from 2005 to date and expect to complete this process by the end of the year.

Additionally, lawyers for some of our customers have worked with our lawyers to propose to a federal court in Arkansas a class-action remedy to guarantee every one of our rebate and direct discount customers will receive 100% recovery plus interest on any shortfall in their accounts without any legal or other costs to the customer, if they so choose to participate in the class. That agreement received preliminary approval from the federal judge in mid-July. We hope it will receive final approval in November.

Please note, this is each and every individual customer's choice to participate or not participate in this class-action settlement. We believe it is a fair and just settlement and allows our customers to be made whole sooner rather than later.

We will not be satisfied until we have identified every single discrepancy, made every affected customer whole and regained the confidence of all of our customers.

2. I announced on April 22 that we had placed several members of our diesel fuel sales team on administrative leave and already had begun restructuring that team.

Currently, seven members of our sales team have plead guilty to abusing our customers' trust and have resigned or been terminated. Others have been placed on administrative leave pending the results of the ongoing investigation.

You know who some of these employees are through your own reporting, but consistent with our policy as a private company, we are not going to publicly discuss any specific employee matters.

We also have made tremendous strides rebuilding our team.

David Hughes, Steve Vanderink and Mike Hill, all senior members of our team, have been moved to diesel fuel sales and are doing outstanding jobs working with existing members of our diesel sales team to set the sales department's new course.

In addition, we have now placed almost every customer contract in writing and will continue to do so going forward. Our goal is to make certain every customer is intricately involved with what his or her contract says so that parties always know the exact expectation of each contract.

3. On April 22, I directed the conversion of all of our diesel fuel customers to electronic calculation and payment, eliminating all manually managed accounts. This has almost been accomplished. In addition, all calculations have been moved to a different department.

4. We asked our outside counsel to help us create and staff a compliance office to report to the company's general counsel to ensure that this type of activity never happens again at Pilot Flying J.

Brand, a partner of the Brand Law Group of Washington, D.C., served as general counsel to the U. S. House of Representatives under Speaker Thomas P. "Tip" O'Neal Jr. and was the House's Chief Legal Officer during that time. Morelli, Nicastro and Harris are also very experienced in the compliance field. Morelli serves as executive vice president and general counsel for Ingram Industries, while Nicastro serves as vice president, general counsel, chief compliance officer and secretary of Bridgestone Americas Inc. Harris is a partner at Neal & Harwell PLC.

The committee, working with our team, is reviewing all of our company policies, procedures and processes and will make recommendations in an effort to improve the procedures and make our company even stronger regarding "doing the right thing".

5. Finally, on April 22, I informed you that our board in a special meeting on April 21 voted to hire a special counsel to make an independent report to the board.

As you know, the board announced on May 1 it had hired Reid Weingarten, one of the nation's 100 most influential lawyers according to the National Law Journal.

As I have previously said when coming before you like this, I would like to tell you in detail everything I know and take every question I know you would like to ask, but I cannot, and I hope you understand.

I appreciate your continued interest in our company and our family. This continues to be the most difficult thing we've ever been through. It's disappointing, embarrassing and infuriating at times, but I have been truly inspired by how much good comes out of adversity.

We are taking this negative and turning it into a strength that will stand us in good stead for years to come. We are committed to ensuring this does not ever happen again.

I want to thank our customers for their continued loyalty, our key suppliers for everything they have done and continue to do for us, and our team members for their focus, hard work and commitment to Pilot Flying J.

Although we have focused a great deal on the allegations made in April, we have not lost sight of the broader business we operate. We have made changes to allow us to serve our customers better, including expanding our 600-strong network of stores with more than 25 new locations throughout the United States and Canada. In response to the needs of our customers, we plan to provide four additional opportunities for our customers to fuel with us in Kentucky, Illinois, Ohio and Texas.

I hope you've also discovered our microsite, www.rebateeducation.pilotflyingj.com, which we launched July 25 in an effort to keep our customers, our team members and you informed on a regular basis. We will continue to keep the site updated with the latest information, including interviews with key team members throughout our company.