GAITHERSBURG, Md. -- Empire Petroleum Partners LLC has named Hank Heithaus chief executive officer and David Potter chief financial officer, signaling what the company said are the next steps in its strategy to further develop its current markets and increase its national footprint in the fuel distribution industry. 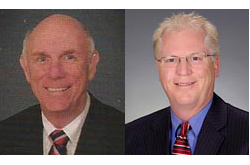 "The addition of these two seasoned petroleum industry executives brings a wealth of talent and leadership to our rapidly growing enterprise," said Mike Diebus, Empire Petroleum's chief operating officer. "We are extremely excited to have Hank and David join our team, and we look forward to capitalizing on their outstanding management abilities to take us to the next level of competitiveness."

"With his extensive industry background and experience, Hank Heithaus brings a unique combination of strategic thinking and a fresh management direction to our team," said Rick Golman, Empire Petroleum's executive vice president. "He is the right person to lead Empire at this stage of our company's evolution as we stand poised to pursue new markets and grow the ones where we already have a strong foothold."

"David Potter joining Empire is an important milestone during an era of sustained growth and continued financial stability in our organization," said Eli Kimel, Empire Petroleum board member. "His thorough understanding of both the fuel distribution value chain and the convenience store market makes David Potter a valuable addition to our already strong executive team."

Based in Gaithersburg, Md., Empire Petroleum is a privately held company focused on service-oriented wholesale distribution of motor fuels and various other distribution-related services within the energy and real-estate industries. It distributes top brands including Shell, Chevron, Texaco, Exxon, Mobil, BP, Amoco, Sunoco, Valero, Marathon and Gulf throughout the Mid-Atlantic, Southeast and Southwest regions of the United States.