FINDLAY, Ohio -- Marathon Petroleum Corp. (MPC) president and CEO Gary R. Heminger touted retail division Speedway LLC’s “strong performance” and said that it has substantially completed the planned conversions of the 1,245 Hess gas stations on the East Coast and in the Southeast to the Speedway brand “well ahead of schedule.” 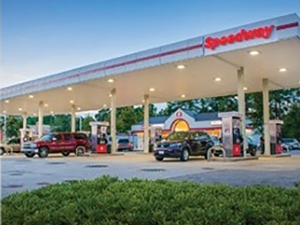 Praising the efforts of Speedway president Tony Kenney and his team, Heminger said during MPC’s fourth-quarter and full-year 2015 earnings call on Feb. 3, “The team's aggressive execution strategy facilitated the realization of its synergies from these locations much sooner than anticipated and beyond our original productions. The acquisition of these high-quality assets has been a tremendous value driver and has exceeded our expectations in virtually every area.”

At the time, Heminger said Speedway would rebrand all Hess retail locations within three years.

Speedway Speeds Ahead on Hess Conversions