LAS VEGAS -- Humble, caring, hardworking, a real competitor--these are common words used to describe Tony Kenney, president of Speedway LLC, Enon, Ohio. At a dinner honoring Winsight LLC and CSP magazine's 2015 Retail Leader of the Year at the NACS Show this week, it was clear the impact he has had on his colleagues, family and friends. 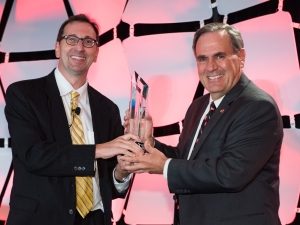 "Tony's about team, Tony's about all of us coming together--he's the most unselfish person I've ever met," said Glenn Plumby, senior vice president of operations at Speedway. "He's about as humble as they come."

Considering that Kenney leads the second-largest company-owned and -operated convenience-store chain in the United States--and a highly disciplined, profitable one at that--this trait is even more remarkable. He also oversaw the acquisition of Hess' 1,250 retail locations in October 2014, and the subsequent rebranding to Speedway, which is still in progress.

But according to those who know him best, that humility has always been at the core of who he is, and a source of strength.

"My dad has always been an extremely humble man," said Ray Kenney, Tony's son. "When he got home from work, he never really talked about his work accomplishments. It was family time from that point."

And Tony Kenney is perhaps equally invested in the success of Speedway's 36,000 employees. Ray Kenney shared one anecdote from his days as an intern at Speedway. On a ride to work with his dad, he expected to be drilled with questions about who at the company was "carrying their weight." Instead, he got questions about how Tony could better help employees, and create a work environment that met their needs.

"He wanted to hear about everyone from the entry level to tenured associates, and was extremely open to hearing their opinions and act on them," said Ray Kenney.

Another son, John Kenney, shared how their father taught him to have a positive work ethic and how to be fulfilled. Tony Kenney's nearly 40-year career with Speedway's parent company, Marathon Petroleum Corp. (MPC), is a case study in how hard work can be rewarded. It also reveals his passion for the job, which has required long days and late nights at the office, especially in the days leading up to the closing of the Hess acquisition.

This attitude is summed up in one of Tony Kenney's favorite sayings: "If you enjoy what you do, then you never truly work a day in your life."

"And he truly lives that," said John.

Close friend and Marathon veteran Mike Peak highlighted Tony Kenney's competitive side, whether on the basketball court during company games or rising up the ranks.

"You have to be competitive to get where he has risen in Marathon and Speedway," said Peak.

But he also emphasized Kenney's caring side, as evidenced by this focus on what matters the most.

And this caring and compassion shines through in Speedway's commitment to Children's Miracle Network (CMN) hospitals, for which the convenience-store chain is its fourth largest corporate contributor.

"My wish for every person here is you have a friend like Tony," said Peak. "There's no greater reward or honor than having a friend like that."

In his acceptance speech, Kenney acknowledged the personal accolades but then, true to form, directed the spotlight back to the people who matter the most.

"It's not an individual award, it's an award that recognizes the 36,000 employees of Speedway," said Kenney. "Everything they do day in and day out, taking care of five million customers in their 2,700 stores."

That includes the conversion of more than 900 former Hess stores to the Speedway brand, from back office to forecourt, signage to training associates.

It also meant collecting and weighing more than 400 best practices from Speedway and Hess that could be used to the benefit of the new, combined company. Thus far, the team has evaluated and is implementing around 250.

"With this team, they will accomplish it," said Kenney. "What I thought would take three years, has taken one year. It's just amazing. And it's a big reason why this reward belongs to them and the 36,000 people at Speedway."