DALLAS -- Although he was referring to conditions specifically affecting the company's refineries in Texas, Alon USA Energy Inc. CEO and president Paul Eisman said during the company's second-quarter 2011 earnings call on Friday that it was "the hottest June ever in Big Spring, with temperatures reaching 117 degrees." But he very well could have been referring to the company's performance, especially at retail.

"Alon Brands continues to set records, and the second quarter was its best quarter in history. Branded fuel sales are up 22% over the same period last year," said [image-nocss] Eisman. Wholesale margins in the period were good at 5.6 cents per gallon. Retail fuel sales were up almost 9% over the same period last year, with very good margins of 19.5 cents per gallon. Merchandise sales were up 7% versus the second quarter of last year, while we were able to increase the merchandise margin to over 33.5%."

Consequently, he said that the company will be upgrading its stores. "Our people accomplished these [financial] improvements--not with capital, but by simply focusing on the basics and operating well; however, with this excellent performance, we see an opportunity to continue the improvement by investing in our stores, and we've initiated a remodeling program. In the first phase of this program, we've targeted 22 stores that will all be completed in the very near future. We're very optimistic that the remodeling program will help us maintain the momentum of profit improvement."

The company still in the first phase of the program. The stores are primarily in the Lubbock, Midland and Odessa, areas, he said. "We're spending money to improve the look of the stores, to improve the foodservice; our anticipation is approximately a 10% uplift in merchandise sales. That's the purpose of the test--to ensure that we can get that. Thus far, although we're fairly early in the program, has been promising."

He added, "It's not increasing our budget because these upgrades or remodels were [already] in our budget; roughly, the average cost that we're putting in the stores is about $100,000 to $125,000 per store."

"We continue to be pleased with our operations to date in 2011, and are even more excited about the prospects for our future," said Eisman.

Dallas-based Alon USA is an independent refiner and marketer of petroleum products, operating primarily in the South Central, Southwestern and Western regions of the United States. The company owns four crude-oil refineries in Texas, California, Louisiana and Oregon, with an aggregate crude oil throughput capacity of approximately 250,000 barrels per day. Alon USA--under its Alon Brands subsidiary--is the largest 7-Eleven licensee in the United States and operates Southwest Convenience Stores, with more than 300 locations in Texas and New Mexico. Alon markets motor-fuel products under the FINA brand at these locations and at more than 600 distributor-serviced locations. 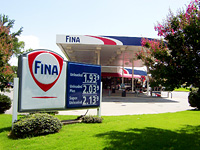