CHICAGO -- There are two main ways convenience stores can help fight against trafficking:

Identify those involved. Traffickers are difficult to spot, but typically they “think very highly of themselves, are narcissistic and egotistical,” says Juliana Williams, program director for In Our Backyard, Redmond, Ore. Beyond that, they could be of any race, age or socioeconomic status. The one factor that usually holds steady is victims of sex trafficking tend to be born in the United States, she points out.

The victims are a little easier to detect. They often have downcast eyes; don’t speak (letting their trafficker speak for them); may have bruises; possibly wear too much makeup; appear fearful/anxious; and may even be branded with a tattoo, which shows the trafficker’s ownership.

CSAT and NACS are teaching convenience stores to educate their employees to recognize these signs and to call for help if they suspect trafficking. It’s important to know they are not calling the police but instead calling a nonprofit, because some people fear bringing the police into their lives.

And any information they can provide—descriptions of people, descriptions of a vehicle, license plate numbers, and the time of day so the incident can be viewed on a video camera—is helpful.

Employees should call as soon as the suspects have left, or sooner. “Call the hotline and they’ll talk you through the next step,” Williams says. “The hotline has highly trained advocates, 24/7, and has people with access to 200 languages who understand human trafficking.” Last year, the hotline received 13,325 calls.

And if c-store employees aren’t sure? “It’s still good to call,” she says. “And your information may be added to an ongoing operation.”

Give a lifeline to the victims. Convenience-store restrooms are a key place to reach these troubled victims, Williams says, because they’re never alone except in here. CSAT has designed stickers for bathrooms, which can give victims hope and gives then a number to text or call for help.

NACS is encouraging its members to take an active role in this. “All jobs have a certain amount of things you have to do, but when you can perhaps elevate that job to have an impact on someone’s life, it makes that job a lot more meaningful,” says Jeff Lenard, vice president of strategic industry initiatives for NACS, Alexandria, Va.

The association is also working with the Blue Campaign, which was established to help victims of trafficking and is part of the Department of Homeland Security. Mick McKeown, executive director of the Blue Campaign, says the most important thing for convenience-store employees to remember is “don’t be a hero,” he says. “That’s what law enforcement professionals are trained to do.” Instead, McKeown says, phone the hotline and let them take over.

Despite that, sometimes being a hero does pay off. In February, a Kwik Trip employee in La Crosse, Wis., helped a woman who had discreetly signaled that she was being held against her will, the La Crosse Tribune reported. The employee hid the woman in a walk-in cooler and called 911. Shortly after, police arrived and arrested the trafficker.

The California Independent Oil Marketers Association (CIOMA), Sacramento, Calif., is working with Truckers Against Trafficking (TAT), an Englewood, Colo.-based nonprofit that was set up to educate the trucking industry about human trafficking. Half a million people in this industry are now trained by TAT to recognize signs of trafficking, and truckers have made 1,980 calls to the national hotline, resulting in 1,035 people being rescued from this underground trade.

What’s noticeable about these call numbers is that they have increased every year, says TAT Executive Director Kendis Paris.

“We really start to see a change in numbers around 2011 and 2012, and truckers have been making close to 300 calls a year since then,” she says. These numbers do not include 911 calls.

“We want to elevate the dialogue on this and educate people,” says CIOMA Executive Director Ryan Hanretty. “Especially in California, where we have major thoroughfares of commerce (I-5 and I-80) and are close to the coast. We especially want to elevate the awareness to the 12,000 c-stores here, which means reaching millions of people.”

CIOMA shares trafficking information on its website, via e-blasts and webinars. At its trade show in September, it will shine a light on this issue and invite CSAT to talk “so our members know how we can help and learn that it’s not happening somewhere else,” says Hanretty. “This is California, in our backyard, and stores can make a difference by educating their employees.” 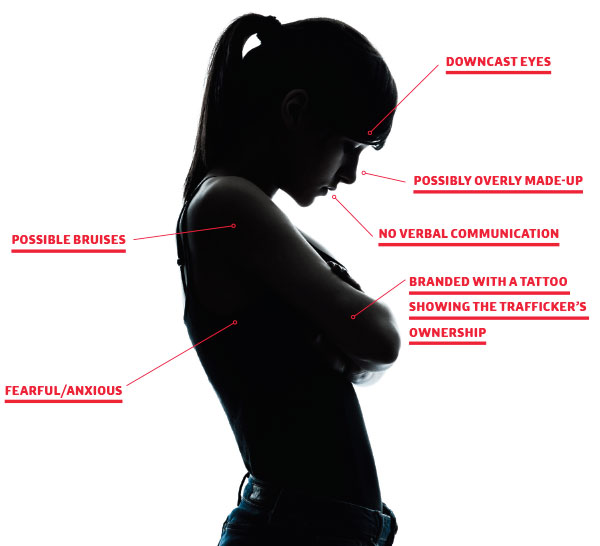 While anyone can be a victim of sex of labor trafficking, there are some common signs to watch our for to help recognize potential victims.