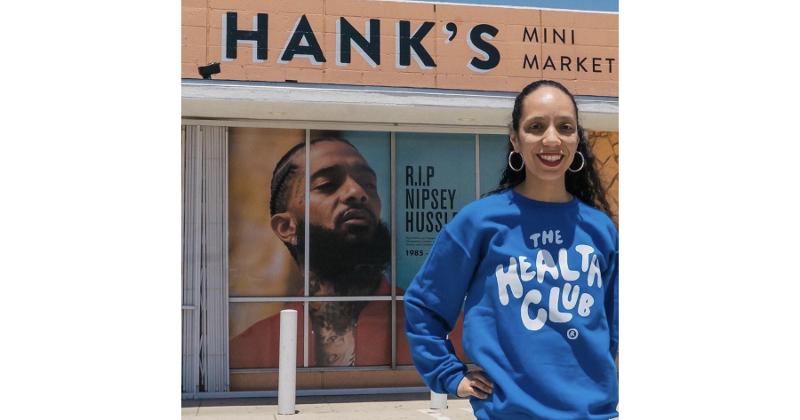 LOS ANGELES — Closing down any small retail business for six months would spell long-term disaster for many entrepreneurs.

Hank’s Mini Market proved to be an exception when it shut its doors in March 2020 due to the repercussions of the COVID-19 pandemic, a closure that could have been an operational death knell.

Fortunately, owner Kelli Jackson (pictured above) found she had a roadmap for relevance during the retail sabbatical. Even while closed, the store didn’t “disappear.” It’s a message to other small retailers about surviving, if not thriving, amid major upheaval.

Located in South Central Los Angeles, Hank’s reopened in mid-October to much fanfare, as it’s well known to many locals as the “corner store” that’s deeply committed to the local community: The store has long been a mecca for gatherings from the days Jackson’s father ran the business.

Through most of 2020, Jackson leveraged social-media platforms such as Facebook and Instagram to communicate with locals, encouraging them to get COVID-19 tested. A cable TV special featured the store in a segment, providing crucial national exposure.

These days, Hank’s Mini Market is back up and running, and hoping for good things in 2021. “It was the best decision to step away,” said Jackson, who owns the 2,500-square-foot store and didn’t lay off anyone. “The time away helped catapult a new chapter for us. I needed it to rest and recoup, and ask: How do we want to return?”

When the store reopened, Jackson found that more people than ever craved shopping locally, not eager to venture too far away from home due to the pandemic. The store had already placed an emphasis on providing healthy, fresh food sourced from local purveyors. Jackson doubled down on the strategy to fulfill the new, emerging priorities, all while keeping the store safe and clean, with low foot traffic.

“We had always been the classic corner store that was very community-driven. That effort became even more vital in the fall,” said Jackson, who “grew up” in the store and became more involved following college in 2004. “2020 was the year of pivoting. While we were closed, people shared our vision. We used Instagram to build momentum and provide vital information.”

Just a year after being named the 2019 small business of year in California District 30 in a statewide survey of retail leaders, Hank’s found it necessary to condense its operating hours from 10 a.m. to 6 p.m. and closed on Sunday.

While it merchandises traditional brand snacks and beverages, Jackson reopened to hear a customer call for even more healthy, immune system-boosting products, such as alkaline water and ginger. She responded in kind by stocking them.

Jackson also placed an accent on curating what’s billed as Hank’s Collection of healthy foods and beverages, curated from local African-American suppliers. One is Cereal & Such, a Los Angeles-based cereal-bar manufacturer with a focus on small-batch, plant-based products, said Jackson.

Going forward, Hank’s Mini Market is prepared for any new curve balls that might upend the store’s plans, including developments connected to the pandemic and beyond. Jackson said that plan is to remain true to the company mission, which is “using art and food to inspire and uplift the community, and dedicate itself to building a healthy community through access to safe spaces. Essentially, we are eager to meet people where they are,” said Jackson.

And, she hopes to meet them at the re-booted Hank’s Mini Market.