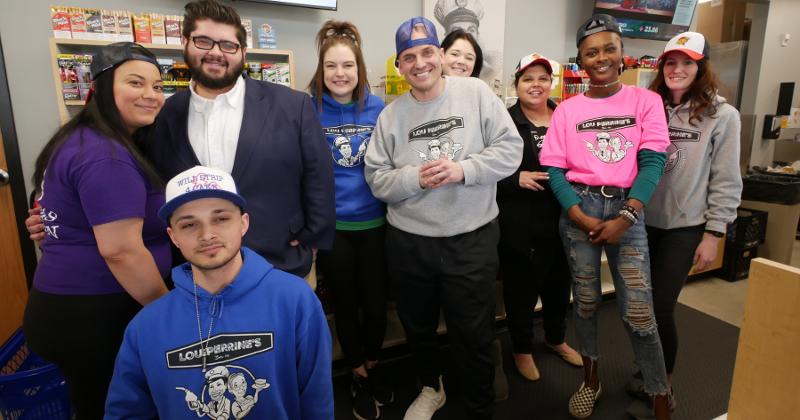 KENOSHA, Wis. — An eternal optimist by trade, Anthony Perrine, owner of Lou Perrine’s Gas & Grocery, is seeking a little of that glass-half-full mentality as he debuts its second Kenosha, Wis.-based convenience store.

Fresh off a late April grand opening event at the new Lou Perrine’s Gas & Grocery, located on the south end of the blue-collar city, Perrine was working to establish a solid and sustainable foothold in a market rife with competitive slings and arrows.

Starting as a small full-service Clark gas station in 1954 in central Kenosha, family-owned Lou Perrine’s opened its second convenience store with a lot of bells and whistles. It features a licensed Einstein Bros. Bagels franchise and dispenses E-85 fuel. Perrine is also attempting to use the store’s 4,400-square-foot selling space to capture the essence of what local residents truly seek—as he understands this lakefront burgh quite well.

Perrine, who came on board the retail operation in 2008, made clear that the new store is considered “my brain in a building.” He elaborates: “The big guys put themselves on every corner and secure the best properties with cookie-cutter stores that don’t offer a lot of local flavor. When you have scale, you lose that flavor. My name is on the building so customers are going to know the store has unique character.”

The store has been in the works for several years but was delayed by road construction, zoning issues and a vehicle crashing into its first store. It was slated to open in fall 2021, but then faced further delays because of the pandemic and supply-chain issues.

Read ahead for a conversation with the store proprietor about topics such as site selection, integration of branded foodservice, synergy between his two stores, and how one Midwest-based independent marketer and Perrine regularly converse about the opportunities and challenges they face as independents.

Q: You had a soft opening in April. How did that evolve over the first weeks?

A: You only get one first chance at a first impression, so we wanted to deliver the best product, best experience possible. We opened April 6, but scheduled our grand opening for April 20 as we needed those two weeks to work out kinks. One early glitch: We offer E-85 at the new store, and at the outset were pumping large volume of E-85 fuel sales. We found that people were picking up the yellow handle and wanting to know why it wasn’t working, as we experienced technology glitches at the forecourt [with three fueling stations and six dispensers]. On the E-85 integration, we were a recipient of a federal grant to bring alternative fuels to the area and are excited to support local farmers and corn growers.

A: We had a local taqueria that set up shop in our original store but went belly up during COVID. About 30 years ago, my dad was [one of the first c-store companies] to integrate a McDonald’s on-site, so he knew the drill to operate branded foodservice successfully. But this is my first go at it, and with Einstein, we’re creating cross-traffic, where the bagel shop helps push velocity for other store categories.

Q: Looking at your two stores, are you seeing some folks patronizing both stores regularly?

A: At first, we saw people who frequent the original store coming to store No. 2 to simply check it out. But we also found that folks who frequent store No. 1 actually live in south Kenosha [or Pleasant Prairie, Wis.] and so the second store made it more convenient. Kenosha is considered a “big small town,” and we find that folks have established very consistent routines with their daily traffic patterns. The one thing that unifies the two stores is we’ve kept several things consistent: offering stores that keep local consumption trends front and center and are anchored by staff that delivers supreme customer service.

“The big guys put themselves on every corner and secure the best properties with cookie-cutter stores that don’t offer a lot of local flavor. When you have scale, you lose that flavor. My name is on the building so customers are going to know the store has unique character.”

Q: About the site selection process: What keys were instrumental for you to select this site versus another vacant lot?

A: The whole corner had been an eyesore for quite some time. There had been a CVS drugstore behind us that sat vacant for some time, and a Piggly Wiggly supermarket was forced to close during COVID. Separate from the fact there was a retail “need” here, we worked with the city of Kenosha on turning this site around and were able to acquire the land very inexpensively. Looking at opportunities to drive ongoing store clientele, Snap-on’s [maker of tools and equipment] headquarters are nearby and there are a lot of “rooftops” in proximity—a neighborhood with homes and apartments.

Q: Describe the nearby c-store competition?

A: I’m going to have to really grind it out to make this work. I’m sandwiched in between a Kwik Trip and a Speedway. The Speedway had been a very small, modest store but was given a major store remodeling recently. Frankly, this is the last retail store I’ll ever buy or build. I love the industry, but it’s a very tough operating environment, and I’m going to need to pivot. Really, operating an ultra-successful retail [store] is going to be tough unless I can come with a new “widget.”

Q: How did the pandemic assist you as far as new business was concerned?

A: We did well mainly on the strength of EBT (electronic benefits transfer) sales. COVID put money into people’s pockets, so EBT sales soared, but then it dwindled down and so did those additional sales receipts.

Q: You keep in regular contact with one indie retailer who might just be considered your muse. Can you go into detail?

A: Lonnie McQuirter [owner of 36 Lyn Refueling Station, a single c-store in Minneapolis] and I are like unicorns … and we talk weekly. I leaned on him after the George Floyd tragedy [in spring 2020], because we here in Kenosha would later experience the same civic unrest during the Jacob Blake incident. I needed advice on handling this situation but, broadly, Lonnie and I have a lot of things we share about store operations and more.