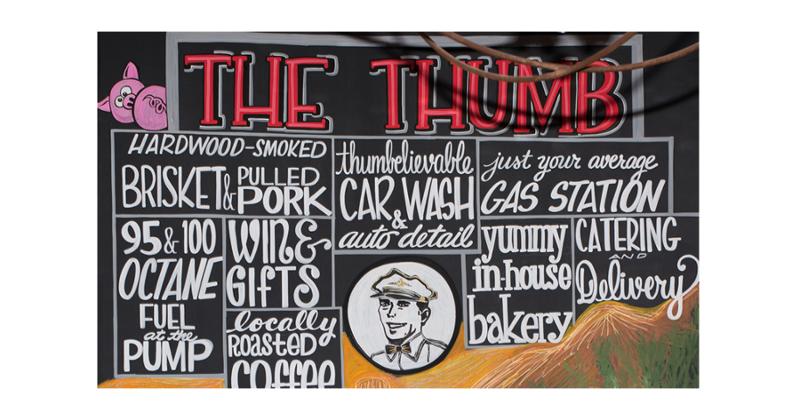 Photograph courtesy of The Thumb

SCOTTSDALE, Ariz. — Throughout the pandemic, independent retailers have cited myriad lessons learned during a strange time. Getting in the trenches with employees. Empathy. Charity. More.

Convenience-store retailer Michael Lawson has added yet another: Lighten up.

Lawson operates The Thumb c-store in Scottsdale, Ariz. Best known for The Brisket Stack, a sandwich featured on The Food Network’s “Diners, Drive-ins & Dives” series, The Thumb opted to go “light” in 2021.

First, Lawson scaled back the robust menu at The Thumb in favor of a number of core sandwiches and entrees. Then, the retailer tweaked its reputation as a carnivore-fueled BBQ destination by rolling out lighter, healthier salads—all to cater to more health-conscious consumers.

“We went back to the basics. Historically, we’ve offered a super-diverse menu but found that it had become too broad. We opted to take out items that took longer to prepare since everything we do is MTO (made to order). Scaling it back allowed us to get food out faster,” says Lawson, general manager of the store. “Speed is more a priority to customers than ever, so it became imperative to get food out a hair quicker.”

The Thumb is probably best known for The Brisket Stack (half for $12.75 or full priced $19.50). The sliced brisket comes over hash-brown cheese cakes, drizzled with chipotle aioli and topped with fried eggs.

“We source prime top-quality brisket and pork. Sausage is all homemade,” Lawson said. “We are also known for our homemade rub, while we cure meats for one full day to allow it to marinate prior to hitting the smoker. All meats, which are smoked on site, are gluten-free. The key is making sure we smoke using the right wood at the right temperature and the right duration. We smoke at 225 degrees for 10 hours.”

The local competition on the BBQ side gets a little green with envy as it eternally attempts to keep up with The Thumb’s lofty reputation. One local option that tries to rival The Thumb is Little Miss BBQ, of which Lawson says: “They do a great job, and come close to our level [on quality]. But as we step up our game, we really don’t need to find additional motivation from the competition because how we go about preparing and offering food is inherent to us.”

The Thumb hasn’t had a problem sourcing BBQ products during the pandemic, he said, but “we still found that we had to pivot a little bit. For instance, we use a standard French fry but there have been times where we had to source a substitute fry. We had good relations with our vendors, which made that work. We’ll buy in bulk form them, and they’ll hold product in their warehouse for us until we’re ready to use it.”

Beyond the food, Lawson said The Thumb has a robust general merchandise and gift department. “We have a full-fledged gift store, and many items are one of a kind. The key is that we have a buyer who does a great job sourcing these unique items, not the ones you won’t find in big box or mass merchandisers. We also source candles, and are a destination stop for our wide-ranging greeting cards. Year over year, we might be down in volume across certain store categories, but we always find that gift sales are on the rise.”

Maybe one other true silver lining that Lawson learned during the pandemic era is “to appreciate staff and customers more than ever. We have made a concerted effort to work through COVID to keep the doors open and retain employees,” he said.

Indie Closeup: On a Mission to Save Lives