SAN ANTONIO -- Valero Energy Corp. said that Bill Klesse, 67, has chosen to step down as chief executive officer effective May 1. Klesse will remain a Valero director and chairman of the board. 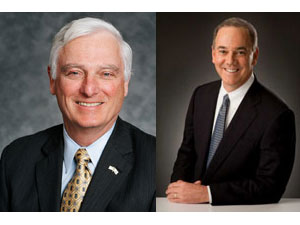 The board elected Joe Gorder, 56, who was named Valero's president and chief operating officer in 2012, to the role of CEO effective May 1. It also elected him as a director. Gorder will join Valero's board immediately.

"I would like to thank our employees, Valero's shareholders, our customers and suppliers, and our communities where we live and work for the support they have given Valero and me," Klesse said. "I ask that these same stakeholders give Joe the same support they have given me. Joe has long played a vital role in developing and implementing our strategies as a key member of Valero's executive team. Our succession plan has been in place for some time and has progressed as planned with the complete involvement and support of the board of directors."

He added, "We have accomplished so much and improved the performance of all areas by working together as a team over the years. At Valero, it is always about a safe, stable and reliable operation, providing quality products for our customers and adding value to society. We must pursue excellence every day."

Klesse became CEO in 2005 and was named chairman in 2007. He has spent his entire 45-year career with Valero and its predecessor companies.

"Bill has done a great job of leading Valero, and he has positioned the company very well to continue to succeed," Gorder said.

San Antonio-based Valero Energy, through its subsidiaries, is an international manufacturer and marketer of transportation fuels, other petrochemical products and power. Valero subsidiaries employ approximately 10,000 people, and assets include 16 petroleum refineries with a combined throughput capacity of approximately 3 million barrels per day, 10 ethanol plants with a combined production capacity of 1.2 billion gallons per year, a 50-megawatt wind farm, and renewable diesel production from a joint venture. Through subsidiaries, Valero owns the general partner of Valero Energy Partners LP, a midstream master limited partnership (MLP). Approximately 7,400 retail outlets carry the Valero, Diamond Shamrock, Shamrock and Beacon brands in the United States and the Caribbean; Ultramar in Canada; and Texaco in the United Kingdom and Ireland.