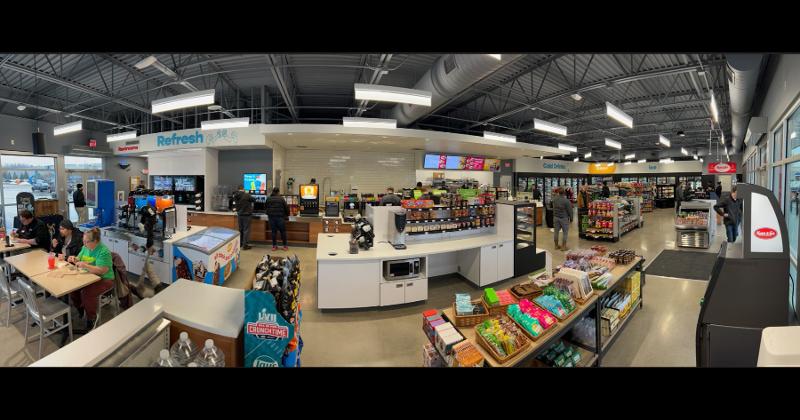 District Supervisor Graham McCaleb told CSP that there has been interest from customers the last several weeks stopping by the Walker, Michigan, store, in the Grand Rapids area, to see when it would open.

“It’s exciting to finally open,” McCaleb said. “There’s been a lot of buzz. They know Kum & Go either by the name or having seen the store being built.”

Des Moines, Iowa-based Kum & Go LC has been planning entry into Michigan over the last year, and the Walker store began construction six months ago, he said. Grand Rapids is the second of Kum & Go’s new market ventures. The company opened in Salt Lake City December 2022 and will enter Boise, Idaho, later this year. It will enter Detroit in 2024.

Michigan is Kum & Go’s 13th state, and the first east of the Mississippi River in more than 20 years, he said. A nearby store, in Wyoming, Michigan, will open Jan. 26, and two are planned to open in the coming months in Grandville, Michigan. A grand opening celebration, including ribbon-cutting ceremony, will take place from 10 a.m. to noon Jan. 30 at the Wyoming location to celebrate both openings and entry into the market.

“Opening our first location in Grand Rapids is certainly a highlight to start off 2023,” said Tanner Krause, CEO at Kum & Go. “We’re excited to bring our fresh perspective to the convenience industry to the people of Grand Rapids, both in the jobs we create and the healthier products we offer. The more we’ve learned about Michigan, the more excited we are to invest here. We look forward to connecting with this community for years to come.”

“We also have a wide variety of healthier items, and still have staples like Lay’s, Pop-Tarts and Bud Lite, and full kitchens where customers can order at a kiosk,” McCaleb said.

Foodservice offerings include made-to-order burritos available for breakfast, lunch and dinner, pizzas, Sourdough Stackers and grain bowls. The grain bowls were among items developed a few years ago as a craveable health offering that can be assembled quickly. Stackers are protein sandwiches with fresh and pickled produce and sauces. All items feature fresh ingredients including brown rice, flavorful vegetables and proteins like brisket and falafel.

McCaleb said Kum & Go is proud that 80% of staff are local hires, with the rest moving to the area. “There was a buzz in the company, with high-performing up-and-coming leaders wanting to move to take advantage of the growth opportunity in western Michigan,” he said. “They relocated for us.”

As part of its “Make Days Better” program, which focuses on three pillars of excellence—people, philanthropy and planet—Kum & Go has partnered with Habitat for Humanity of Kent County, sponsoring a home build in Grand Rapids’ Baxter Neighborhood, the company said. The nine-home community is being built with a focus on energy efficiency and expected to be completed this spring.

Established in Hampton, Iowa, in 1959, Kum & Go is a fourth-generation family-owned convenience-store chain that shares 10% of all profits with the communities it serves.