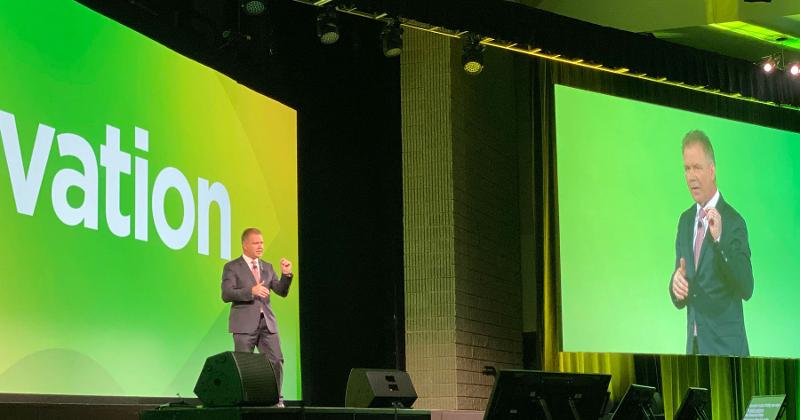 ATLANTA — Embracing change and nurturing values of leadership were core concepts that two general-session speakers emphasized during the second full day of the NACS Show in Atlanta, with outgoing Chair Frank Gleeson saying mentorship was one of his strongest memories in his year of leading the convenience-store association.

Gleeson, the first chairperson from a European chain, Dublin-based Aramark Northern Europe, said watching a colleague of his go through a leadership program at Cornell University this year reminded him of how his own experience with that same program years ago transformed his career. “It [changed me] from a manager to a leader,”  he said.

Describing leadership situations that focused on team building, he said, “Inspire your team to be the best they can be. The key is to be brave, have conviction, courage and never give up the fight.”

Drawing from his global perspective, Gleeson said international issues will soon become concerns here in the United States, pointing specifically to growing calls for environmental stewardship and sustainability. He said one of his company’s clients asked for services that prohibited the use of plastics, everything from forks to packaging. His company accomplished it, but he said retailers here need to focus on how calls for sustainability will lead to change.

In one example, she said her team faced a rafting challenge using two inflatable rafts. Her teammate proposed tying the two rafts together to create one long vessel and to turn their rafts into a kayak-shaped “missile.” The idea allowed the team to row past the leading competitor and win the race.

Her athletic challenges ultimately led to multiple hip replacements, which steered her toward other endeavors. She spoke of becoming a world-class kayaker and founding an organization that allows individuals facing catastrophic life changes to experience their own athletic adventures.