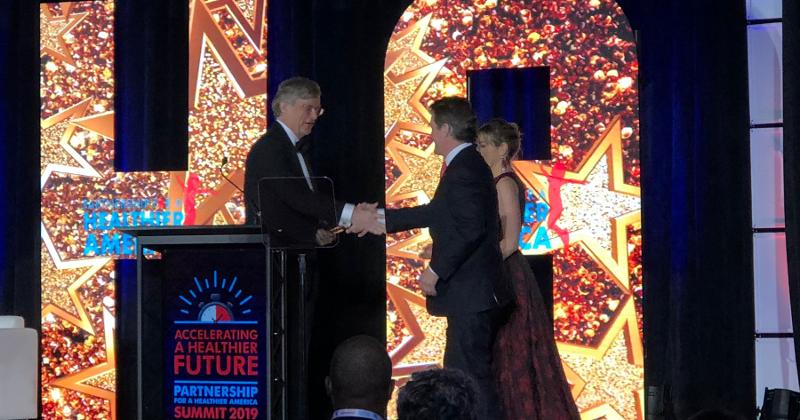 CHICAGO —NACS has been named Partner of the Year by the Partnership for Healthier America (PHA) for its commitment to fighting obesity in the convenience channel. PHA presented the award April 2 during its 2019 Summit: Accelerating a Healthier Future in Chicago.

The group presents the award annually to a PHA partner that goes above and beyond in its commitment to fighting obesity. This includes focusing on populations disproportionately affected by obesity; doing well while doing good; using an innovative approach to address childhood obesity and other chronic diseases; or creating a ripple effect within its respective industry.

“This award recognizes both the efforts of our industry to make the healthy choice the convenient choice and the power of PHA to provide the connections and resources to make a difference in communities,” said Henry Armour, president and CEO of NACS. “Convenience stores serve 165 million Americans per day, and most customers are in and out of our stores with their food and beverage purchases in about three minutes. That is why it’s so important for retailers to provide cues that can help their customers make healthier choices.”

NACS began its partnership with the PHA in 2017. Its commitment to healthy eating includes:

Five finalists were selected for the award. Besides NACS, they are the Des Moines Area Religious Council, an interfaith food pantry network; The University of Wisconsin–Extension, an outreach arm of the University of Wisconsin system; Produce Marketing Association, a trade organization representing companies in the fresh produce and floral supply chains; and McLane Co., a NACS supplier member. Mercedes-Benz USA received the award in 2018.

“We now sell a quarter of a billion dollars of fruit, which today is as popular of a snack in our stores as popcorn or pretzels,” said Armour. “Water sales are $4 billion, a healthy increase from just a few years ago. And one in six dollars is spent on prepared food in stores. With the help of PHA, convenience stores are redefining what it means to be a great community partner, and we continue to bring this message to our entire NACS membership.”

The PHA’s mission is to leverage the power of the private sector to bring lasting systemic changes that improve the food supply, increase healthy choices, increase physical activity and contribute to a culture of health. In 2010, PHA was created in conjunction with—but independent from—former first lady Michelle Obama’s Let’s Move effort.

Founded in 1961 as the National Association of Convenience Stores, Alexandria, Va.-based NACS has 1,900 retailer and 1,800 supplier members from more than 50 countries. The association has more than 153,000 stores nationwide selling fuel, food and merchandise.