ATLANTA -- As likely to wrestle a shark or crawl the length of the Great Wall of China, Brad Call, whose boyish looks and buoyant persona project an adventurous spirit, is hardly the face of caution. 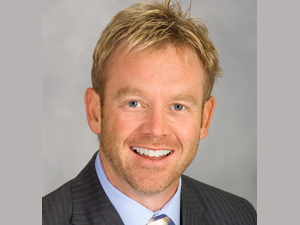 So when the Maverik Inc. executive accepted the proverbial mantle of leadership as NACS’ chairman for the next 12 months, an air of spontaneity permeated an industry often known for its conservatism.

“This should be a fun 12 months,” one former NACS board member mused. “I hope NACS knows what it’s in for.”

Then again, Call can rarely predict the next thought that will emerge from his fast-paced mind.

More comfortable in a Hawaiian shirt and loafers than jacket and tie, Call delivered an entertaining, compact history during the NACS Show closing general session of his family and its business, a story steeped in entrepreneurialism and large clans--notwithstanding his wife and nine children (we did say large family).

The story starts in 1928, when his pioneering grandfather, Reuel T. Call, opened the first of what is today more than 240 convenience stores, with the company’s headquarters in North Salt Lake, Utah. And it continued with an uncle who, observing the stultifying extended Wyoming winters, built a high-altitude airplane.

A heritage of self-starters had been born. Today, it is found in Maverik’s Adventure’s First Stop stores, a one-of-a-kind convenience concept replete with resplendent in-store images of whitewater rafters, surfers, skiers and those who celebrate boundlessness.

“We’re passionate about thrilling our customers and emotionally connecting with them through adventure,” said Call, who holds his company’s unique title of vice president of adventure culture. Among the examples of thrill, he cited that when Maverik opens a store, it does not hold a grand opening, but rather an open house--one loaded with activities and adventure.

In addition to adventure, Call’s other favorite word is also the name of his Wyoming hometown: Freedom.

“I love living in freedom both literally and figuratively,” he said. To that end, Call hoisted a bladder-buster mug at least five times the size of what New York City Mayor Michael Bloomberg would have permitted in his failed bid to cap the size of carbonated soft drinks.

That choice means the right to sell fattening items as well as healthier options.

“It’s an awesome thing that our nation is focusing on health, fitness and fighting obesity,” he said. “Your responsibility and my responsibility is to provide healthy options.

“But it’s not our responsibility to tell customers what they should and shouldn’t eat.”

To facilitate better health, Maverik is developing an app called “Consume It, Burn It” that rewards users for their exercise and, the company hopes, entices them to buy items at the store.