SCOTTSDALE, Ariz. -- A summary of convenience store statistics? And it's not even State of the Industry season. How mundane! Or at least that's the impression laid out by Call & Carpenter, going by the Top Gun call signs Mav and Goose. 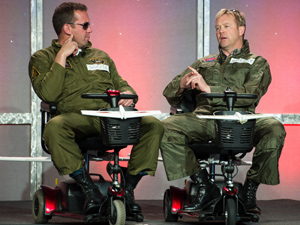 Of course, these youthful Gen Xers are Brad Call and David Carpenter, two accomplished convenience operators who are respectively chairman and most recent past chairman at NACS.

Paying homage to the mid-1980s, an era recovering from the disco era and embracing two terms of Ronald Reagan and the Wall Street of Gordon Gekko, Call & Carpenter cycled onto the stage at CSP's 2013 Outlook Leadership Conference in Scottsdale, Ariz., in shades and gear from Top Gun. Of course, the ever-humble Call was Cruise, giving up suit and tie and what he feared would be the "dumbest, cheesiest, stupidest presentation of your life."

Honoring the spirit of a film, Call & Carpenter--who also head up their own businesses, Maverik Inc. and JD Carpenter Cos.--tapped Top Gun songs to introduce a handful of targeted, rapid-fire themes.

It started with "Take My Breath Away" by one-hit wonder Berlin.

"Overall, industry sales took my breath away because they are so amazing," Call wailed, scooting around like a lab mouse locked in an inescapable labyrinth. With Call and Carpenter jostling over what is better, a Slurpee or ICEE, Carpenter interjected, "have you ever been waterboarded with a Slurpee."

The tone was set. This would not be a droning presentation of monotonous numbers. Indeed, data was the backdrop to an unconventional skit, one perhaps portending an enthusiastically unpredictable year by a Utah-based showman known for defying convention.

It was nice to learn that the c-store channel was No. 1 among retail channels in the sale of gasoline, cigarettes, OTP, beer, candy and lottery. It was pretty cool to appreciate that the industry's 160 million transactions per day topped by nearly 50% the number of households who watched last year's Super Bowl.

But surely such figures could not compare to Call's somewhat flat rendition of The Righteous Brothers' "You've Lost That Loving Feeling."

When Carpenter queried what connection the song could have with the c-store industry, Call replied, "it's about getting back what you lost." And that meant two things: gasoline and cigarette sales.

At least for gasoline, Carpenter chimed, "It' ain't coming back folks. It could get worse." In a pause of seriousness, he cited declining fuel consumption since 2007 and CAFE standards that will only hasten the decline of trips to the pump. And both agreed that cigarette sales would continue their decline, yet hopefully be offset in the near future by a robust electronic cigarette sector.

But back to Top Gun. There was the unmemorable "Mighty Wings" by Cheap Trick, harkening to the industry's rise in foodservice and increasing commissary food programs.

And Loverboy's "Heaven in Your Eyes," which prompted Carpenter to stare into Call, "you're really creeping me out."

Loverboy's connection to convenience stores? "I want to be heaven in employees' eyes," Carpenter said. He praised as an industry model Kwik Trip's 40% return of profits to its employees.

The songs and their fuzzy connections to convenience continued. So did the "whirly derby" of two adult men in cool shades who turned the stage into a recreational time machine of when they were young and life didn't seem so serious after all.