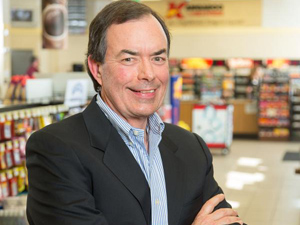 "Our strong first-quarter results reflect continuing progress as we grew merchandise and fuel gross profit while controlling expenses," said Hatchell. "Improved merchandising effectiveness drove a 3.6% increase in comparable-store merchandise sales and a 5% increase in sales per customer. Fuel gross profit and comparable-store fuel volumes improved significantly as we benefited from our focus on fuel price management and a continued decline in fuel costs."

Net income for the quarter was $18.9 million. This compares to a net loss of $5.1 million in the same quarter last year.

The chain experienced stronger comparable-store merchandise revenue growth in packaged beverage products and proprietary foodservice categories. Cigarette sales, which have been declining for an extended period, strengthened during the quarter, contributing $2 million to the overall increase in merchandise revenues through a 2.6% increase in cigarette sales on a comparable-store basis. Merchandise revenue also increased $700,000 from the first quarter of fiscal 2014 as a result of new convenience store openings since the beginning of that quarter. These increases were partially offset by lost merchandise revenue from stores closed since the beginning of the first quarter of fiscal 2014 of $4.7 million.

Merchandise gross profit increased $5 million or 3.4% from the first quarter of fiscal 2014 primarily due to the increase in sales and a 30-basis-point improvement in merchandise margin to 33.8% from 33.5% in the 2014 period.

Fuel revenue in the first quarter of fiscal 2015 decreased $ 138.4 million or 10.2% as a result of a decrease in average retail fuel price per gallon of 12.5% to $2.87 in the quarter, largely due to declining wholesale fuel costs as demonstrated by the changes in Gulf Spot prices. The effect of the lower average fuel price was partially offset by an increase in retail fuel gallons sold for the quarter, up 3.2%, or 12.9 million gallons compared to the first quarter of fiscal 2014. The significant improvement of gallons sold is primarily due to a 3.7%, or 15.2 million gallon increase in comparable-store retail fuel gallons sold.

Fuel gross profit increased $28.5 million or 58.6% as a result of an increase in retail margin per gallon to 18.2 cents in the first quarter of fiscal 2015 from 11.8 cents in the first quarter of fiscal 2014. The continued decline in wholesale costs and increase in gallons sold led to substantial improvement in fuel gross profit. We compute gross profit exclusive of depreciation and allocation of store operating and general and administrative expenses and inclusive of credit-card processing fees and cost of repairs and maintenance on fuel equipment. These fees totaled 6.4 cents and 6.6 cents per retail gallon for the three months ended Dec. 25, 2014, and Dec. 26, 2013, respectively.

Store operating expenses for the first quarter of fiscal 2015 decreased $1.3 million, or 1%, from last year. The decrease was primarily due to a decrease in purchases of non-capital equipment and lower equipment rental fees, as a result of less activity in the chain's store remodel, quick-service restaurants (QSRs) and new-store initiatives.

Adjusted EBITDA for the first quarter of fiscal 2015 increased $35.5 million, or 83.8%, from last year. This increase is primarily attributable to the increase in fuel gross profit and higher merchandise gross profit.

He continued, "Of importance for Couche-Tard shareholders is that Pantry had in the last two years begun the process of culling its store network, improving its fuel pricing strategy and execution, expanding its foodservice offerings and improving its customer experience. Pantry was somewhat constrained by its balance sheet. The financial impact of these ongoing initiatives should increase as Couche-Tard accelerates the pace of change."