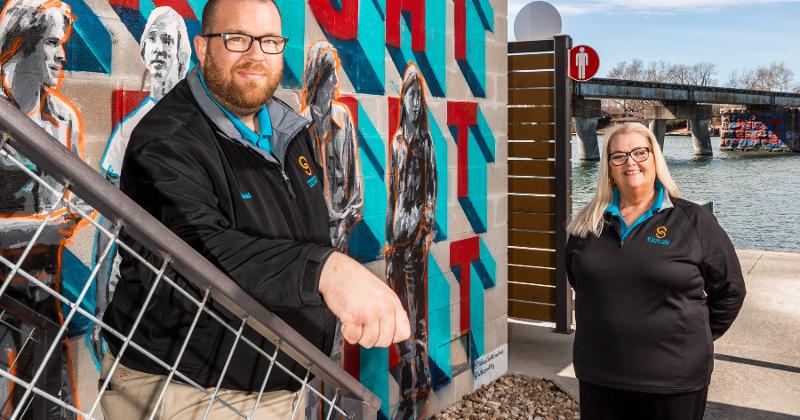 CSP collects stories of the men and women of convenience retail who put their lives and livelihoods on the line when their communities needed them.

TEMPLE, Texas — The challenges of the pandemic struck fast and they hit deep. For StrasGlobal—a convenience-store operator that manages sites under various flags for oil companies, banks, investors and individuals—developing an action plan was a key to getting through. The company formed a task force and developed a comprehensive response plan to deal with the uncharted coronavirus crisis at a time when few retailers had such a strategy.

StrasGlobal operates 19 locations over a widely dispersed geographic footprint of seven states, from Oregon to Louisiana to New York, and is responsible for staffing.

Terresa Burdick, director of training for the Temple, Texas-based company, serves as the operations representative on the task force, helping structure the program, policies and procedures. She writes and designs site materials and signage, sources personal protective equipment and makes sure PPE gets distributed.

In the shadow of the growing pandemic, preparedness was key, says Burdick, and StrasGlobal’s plan was ahead of the curve.

“Being on the task force heightened my awareness,” she says. “It is through that awareness that makes me feel we have done everything we should have to respond. … StrasGlobal, like so many other companies, had plans for hurricanes and other weather-related disasters, fire, emergencies, but nothing like this.”

Training Manager Daniel Farley describes the pandemic-focused daily routine as “a new way of operating. There are always restrictions; there’s always something that you have to do. We build our day around the COVID-19 response plan.”

The morning starts with reviewing correspondence from the task force asking how they are doing and what they need. The daily updates provide new information for the store’s market area or from the government. “It will give you an idea of what’s new, what’s changed,” says Farley. “It’s helpful to know what you need to plan for, what you need to expect,” especially with operations in several states.

“It’s really nice to be able to have that line of communication and that level of support every day, not just from your district manager, but the whole operations team, the whole task force, plus the president of the company,” he says. “It has made dealing with this a lot easier. I almost want to say that I don’t have to watch the news to know what’s going on, because I get it in my inbox every morning.”

The stores took measures to ensure social distancing that have now become familiar: curtailed foodservice, limiting the number of people allowed in the store, taking out every other table where sit-down dining is still allowed and putting footprint stickers on the floor, says Farley.

“Everything that we did as a company, in the very beginning, I told myself it was crazy. I know I have to do this because it’s my job,” he says. “If I could go back in time and tell myself one thing, it would be just do it. Get over it. It’s for the best. I was one of those people in the beginning who said, ‘This is nothing; it’ll pass. I don’t know why we’re doing all of this.’ If I could have done it a little differently, I would have promoted it as ‘Let’s just get through it.’ ”

Employees’ temperatures were taken at the beginning of each shift. A COVID cleaning checklist—credit-card readers, ATM buttons, etc.—was attended to every 30 minutes.

“I had people scream and cuss me out, [until] mask wearing started to become the new normal.”

“There are a lot of things that we added on to our regular cleaning checklist that were very foreign to them,” Burdick says. “It’s just a matter of habit. Getting used to doing those kinds of things. We were already big on hand washing at the stores, like every 20 minutes, even before the pandemic, because we’re handling food and money and touching all kinds of things. But a lot of things we implemented overnight, such as the gloves and the masks.”

And right away, employees put up barriers at all checkouts. “It gave employees and customers a sense of security having those barriers up,” she says.

The stores also added self-cleaning film that contains light-activated crystals to mouse pads, change mats at all of the POS systems, all of the handles on the cooler doors, restroom doors, office doors and the entry and exit doors, as well as glove dispensers at fuel pumps.

Burdick says the hardest part of the program to enforce “hands down” is the mandatory mask wearing. “Many of our sites are in smaller communities that either don’t believe masks are necessary or just dislike wearing one. It doesn’t matter what state it is. We’re finding that pretty much across the country.”

Farley has experienced the pushback firsthand. “People say, ‘A virus isn’t going to get me.’ I try and tell them some people are scared, and for everybody’s safety, we have to just do what we have to do to get through it,” he says. “I’ve had people scream and cuss me out and throw a fit or throw something across the store. But as mask wearing started to become the new normal, people just started to get used to it.”

Still, Farley says he’s had to ask numerous people to leave the store. And they did. “Tensions are high. And I understand where they’re coming from,” he says, “but it’s hard enough dealing with a pandemic when your employees are scared, so throw that in the mix and it makes for an interesting day.”

On the employee side, proper positioning of the mask is an issue, Burdick says. “Making sure the nose and mouth are both covered. You’re always wanting to pull that mask down under your nose for some fresh air, especially when you’re working an eight-hour shift, or managers working 10 or more. It does get a little cumbersome.”

StrasGlobal updates the COVID response plan frequently as needs and regulations change and as the company determines what works well and what doesn’t. The company has also created a vaccine task force and developed a vaccine policy and guide and implementation checklist for retailers.

“Communicating how to get vaccinated and helping employees through the process should be of the highest priority for all businesses,” says Eva Strasburger, president of StrasGlobal.

Click here for more of Perseverance in a Pandemic.

Perseverance in a Pandemic: Holding on Downtown

Perseverance in a Pandemic: Crisis at the Pump