KNOXVILLE, Tenn. -- Pilot Flying J CEO Jimmy Haslam on Tuesday met and greeted truckers filling up at one of the company's travel centers in its home base of Knoxville, Tenn., as part of its Driver Appreciation Month. Haslam also took a moment to speak to reporters about the ongoing federal investigation into rebate fraud at the company, said a WBIR-TV report. 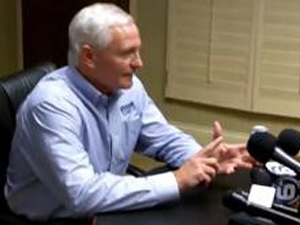 It has been more than five months since the FBI raided Pilot headquarters to investigate an alleged scheme to cheat trucking companies out of diesel fuel rebates. Since the April 15 raid on the company's headquarters, seven Pilot employees have pleaded guilty in federal court to fraud-related crimes.

"Clearly some people who worked for Pilot Flying J, I should say apparently made bad decisions and I think I made it very clear we're going to deal with that. Clearly we have to deal with the government investigation, we are dealing with it, and continue dealing with it going forward," said Haslam, speaking on the scandal for the first time since a trucking industry conference in Indianapolis in May. "We have more than 25,000 people working for this company and the vast majority of them do the right thing every day taking care of customers."

"We're talking to drivers and thanking them for the great job they do for our country and how much they mean to Pilot Flying J," Haslam said, according to the news outlet. "We're most appreciative for the confidence trucking companies and drivers have shown in us. We'll obviously continue to work hard to earn their trust moving forward."

The ongoing efforts to bolster customer relationships now extend to Haslam and Pilot repeatedly expressing appreciation for customers via billboards, decals on the sides of fuel trucks, and personal face-to-face greetings.

"Everybody that works in management in Pilot Flying J will be out in the stores," said Haslam. "In the next few days, we'll be in Delaware, Maryland, New Jersey, New York, Ohio and all over the country."

As for the everyday customer at the pump and in the stores, Haslam said everything is right back to business as usual. "At first there was a lot of hullabaloo about it [the investigation]," said Haslam. "But really it has all calmed down. We've opened a lot of stores over the summer and over the last few weeks and I always go to store openings. ... It [the investigation] is never brought up. I never hear anything about it in the stores at all the last several months."

In honor of this year's Driver Appreciation Month, the chain is offering double MyRewards points for all professional driver loyalty members throughout the month of September. Additionally, it is offering in-store giveaways at Pilot Travel Centers and Flying J Travels Plazas from Sept. 15 to 21.

Meanwhile, James A. Haslam III, CEO of Pilot Flying J ,. Knoxville, Tenn. (and owner of the Cleveland Browns professional football team), with a net worth listed at $1.45 billion, is at No. 369 on The Forbes 400, the Richest People in America.

Other industry-related retailers on the list include Tom Love, chairman and CEO of Oklahoma City-based Love's Travel Stops & Country Stores, and his wife, Judy, who have a net worth of $3.6 billion, listed at No. 132, and Ron Burkle, the founder of The Yucaipa Cos. LLC, Los Angeles, which now owns the El Sugundo, Calif.-based Fresh & Easy small-format grocery chain, with a net worth of $2.7 billion, is listed at No. 201.