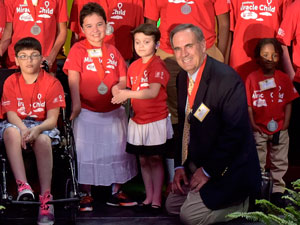 A deluge delayed the tournament’s start. CSP was in attendance as golfers and families of more than two-dozen “Miracle” kids—there to cheer on the participants—patiently waited for the sun. Soon, Speedway president and CEO Tony Kenney teed off and lead golfers onto the course, launching a day of sport and fundraising.

Enon, Ohio-based Speedway LLC, which has more than 2,700 convenience stores in 22 states, is the fourth-largest corporate contributor to CMN. It has raised more than $68 million in its 24 years as a corporate sponsor, supporting 19 hospitals in its original Midwestern marketing footprint.

Last year, the Speedway Miracle Tournament raised $1.45 million for CMN. Speedway had targeted raising $2 million for the 2015 event. This would place it well on its way to its goal to raise $10 million for 2015, with hopes to beat its $8.2 million record from 2014.

“It would be unfair to classify this as a golf tournament. It is much, much more,” said John Lauck, president and CEO of CMN. “I love the thought of a ‘miracle tournament’ because this really goes beyond and achieves something extraordinary.”

Lauck noted that more than 90 corporate partners, 300 media partners, celebrity spokespersons and 250 colleges and universities raise money for CMN. The nonprofit is on course to raise $1 billion by 2022 for the 170 children’s hospitals in North America it represents. Speedway, he said, is well on its way to quadrupling the amount it raised in 2010, when CMN first set this goal.

“This is a lot more than a commitment,” said Lauck. “This is a conviction.”

While the golf tournament is a powerful fundraiser, most of the millions of dollars Speedway raises for CMN each year come in the form of pennies, nickels, dimes and quarters dropped into change bins on the counters of Speedway stores. Speedway store associates, led by 2,100 general managers, encouraged customers to donate a total of $6.8 million via these change bins in 2014 alone.

“It has really become part of our culture,” said Kenney in an exclusive interview with CSP. “Our store associates are the ones who are really passionate about raising money for children’s hospitals. And the key to it is that the money you raise for the hospitals at local stores throughout our marketing territory stays with the stores in that area. So there’s really that strong connection between the charity raising money locally and helping kids and families.”

Kenney serves on the CMN board, and Glenn Plumby, senior vice president of operations at Speedway, sits on the board of governors.

Opening the golf tournament was Speedway’s third annual Miracle Dinner. It began with a parade of 26 children and their families who are or have been patients at 19 hospitals that Speedway supports through CMN. Kenney and Plumby greeted the group of Miracle children, who range in age from four to 18 and have battled a range of injuries and illnesses.

Golf legend Jack Nicklaus and his wife, Barbara, as well as Miss America 2015 Kira Kazantsev, co-hosted the night, handing out medals to the children, their families and others

The Nicklaus Cos., which designs golf courses and produces golfing apparel and equipment, has partnered with Speedway to raise money for CMN with the sale of Nicklaus golf balls at the checkout of Speedway stores through the end of July. They will donate $1 from each purchase of the golf balls to the hospital nonprofit.

The dinner also included an auction of six pieces of art made by Miracle children, raising more than $45,000 for the hospital network.

“The most important thing and best part of it is we’ve invited 26 Miracle children to this event,” Kenney told CSP. “Those 26 children represent the 19 hospitals that we support. Over the years I’ve had an opportunity to meet so many of those wonderful kids that have amazing stories, have fought really courageous battles throughout their lives. And it just feels good to talk to them, get to know them and to have them be a part of this.”