FERGUSON, Mo. -- A QuikTrip convenience store in Ferguson, Mo., was destroyed on Sunday after rioting following the shooting of an allegedly unarmed teen by police. Rioters and looters damaged several other businesses, as well. 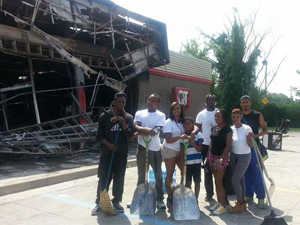 QuikTrip spokesperson Mike Thornbrugh told The St. Louis Business Journal that there have been "no discussions whatsoever" about whether to rebuild.  Instead, the retailer is focusing on its employees and customers, he said.

The company does not even have a process for how to make that decision, he said; it has never faced a similar situation.

Thornbrugh said the cost of the damage had not yet been assessed, but he expects the destruction of the convenience store's structure and merchandise will likely total seven figures.

Employees who were working at the QuikTrip Sunday night made it out safely before the looters and rioters stripped and burned down the store in the chaos that followed a peaceful vigil for Michael Brown, an18-year-old man who was shot dead by a police officer Saturday, said the report.

The FBI is investigating the circumstances of the shooting.

On its Facebook page, the company posted this statement: "Thank you for the outpouring of support and concern regarding our Ferguson, Mo., QuikTrip location and the good people working at the store. Our employees and customers are our priority in this situation, and we are grateful to share that all QuikTrip employees are safe and unharmed."

Thornbrugh said the company is offering employees of the store counseling and, once they are comfortable, the opportunity to transfer to another store while the company decides whether to rebuild.

QuikTrip is leaving security of the site to the police for now. "With all due respect, there's nothing left to protect," Thornbrugh said.

Click here to view a CBS News report with before-and-after photos of the QuikTrip convenience store.

QuikTrip: ADA Changes 'Made Us a Better Company'