ANKENY, Iowa --Casey’s General Stores Inc. has announced that after more than 26 years with the convenience-store retailer, Robert J. Myers, chairman and chief executive officer, will retire as CEO at the end of Casey’s 2016 fiscal year on April 30, 2016. 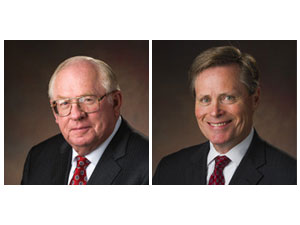 Myers, 68, who has served as Casey’s CEO since 2006, will continue to serve on the company’s board following his retirement.

As reported in a 21st Century Smoke/CSP Daily News Flash, Casey’s board of directors has named Terry W. Handley, currently president and chief operating officer, as president and CEO, effective upon Myers’ retirement.

“On behalf of the board, I want to thank Bob for his extraordinary contributions over the past nine years as our CEO," said William C. Kimball, lead director. "During his tenure as CEO, Bob has overseen significant and profitable growth as Casey’s has built and acquired nearly 500 stores, while enhancing the performance of our existing stores through strategic remodels, customer-oriented initiatives and new product offerings. Under Bob’s leadership, total shareholder return has increased more than 330% – triple that of the S&P 500 – and has positioned Casey’s favorably for future growth and value creation.”

He continued, “We are excited to have an executive of Terry’s caliber who can seamlessly step into the CEO role. Terry is a true leader who brings deep knowledge of all aspects of our business. The board is confident that Terry is the right person to build on Casey’s momentum and guide the company to the next level.”

Myers said, “It has been a privilege and an honor to be part of the great Casey’s family for the past 26 years and to serve as CEO for nearly a decade. While I am proud of all we have accomplished together, I am equally excited for the future and watching Casey’s continue to expand its presence throughout the Midwest. I am extremely confident that under Terry’s leadership as CEO, Casey’s best days are ahead.”

Handley said, “I am grateful to the board for its vote of confidence and to Bob for his mentorship over the years. I look forward to working closely with the Board, our talented management team and employees to continue to drive shareholder value.”

Casey's General Stores, based in Ankeny, Iowa, operates more than 1,850 convenience stores in 14 states throughout the Midwest.